Book Review: Blood and Other Cravings edited by Ellen Datlow 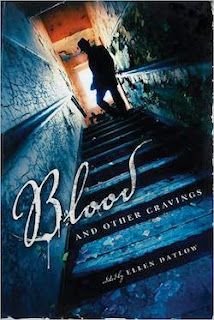 With prominent franchises like The Vampire Chronicles, Vampire the Masquereade, Stookie Stackhouse, and the much maligned-Twilight series, one common misbelief held by a number of people is that vampires are cliched, stale, and unoriginal. Deviate too far from what's established, and you end up alienating a segment of the population, in much the same way "sparkling vampires" have become a joke—even if the original Stoker novel did not involve Dracula burning in sunlight. On the other hand, too faithful renditions written without style or deliberation end up as pastiches that prove the misconception. The real dilemma isn't the usage of vampires, but rather how to present them in such a way that invigorates the imagination and interests readers. Ellen Datlow is no stranger to anthologies, and in 2011, along with co-editor Terri Windling, they released an impressive vampire-themed YA anthology, Teeth: Vampire Tales. The question is whether Blood and Other Cravings can similarly stimulate the adult reader, and leave a distinct impression.

What gives Blood and Other Cravings depth is the way it interacts with readers, stirring debate and creating dialog. It does so because Datlow and her contributors aren't focused on the literal vampire—although there's no shortage of that here—but the metaphor of what it represents. It's tapping into the zeitgeist, and one constant lurking question is who preys on whom, or who is the vampire? Take for example "Keeping Corky" by Melanie Tem, which at first glance seems gimmicky (in the same sense that "Flowers for Algernon" gives the initial impression that it's a one-trick pony when it's not), but if you dig deeper, reveals this constant interplay between parasite and prey, and changes how you read the narrator's plight. While it could be said that the supernatural element could have been discarded, its presence adds another facet to the relationships. By the time you finish the story, the question isn't so much who is the vampire, but who are the vampires.

And then there is the craft of the short story: powerful, well-written pieces that rely on technique rather than simply conceit to win the reader over. There's "Shelf-Life" by Lisa Tuttle, where the narrator's seemingly-arbitrary obsession with houses comes full circle by the time you reach the end. It's a terrific example of synthesis between character, setting, and conflict, and the presence of a recurring theme enriches the narrative. It's a very character-driven story, however, and part of the allure is understanding the narrator's psyche and her concerns, which does not diminish the vampirism element that is the heart and blood (no pun intended) of the anthology. Or "Toujours" by Kathe Koja, which is all about restraint and sub-text. She never outright states the implication of her protagonist's actions, but reading between the lines and interpreting the ending's ambiguity is part of the enjoyment.

That's not to say every story wins you over. A lot are, for the most part, entertaining reads that satiate you until the main course like "Needles" by Elizabeth Bear, a buddy story featuring non-standard vampires, and "Baskerville's Midgets" by Reggie Oliver, an atmospheric haunted house story that differentiates the dwarves from the midgets. I'm not a big fan of flash fiction, and there are two that I found memorable. "Caius" by Bill Pronzini and Barry N. Malzberg had a strong opening, but fails me for two reasons: the vampire-as-metaphor felt heavy-handed, and ultimately lacks a payoff beyond the initial premise. It's not an issue of word count, as a similar short piece is "First Breath" by Nicole J. LeBoeuf. LeBoeuf knows the limitations—and strengths—of the flash fiction format as her story left a distinct, romantic image in mind, while still providing substance.

If the other stories were appetizers, then what do I consider the main course? The last three stories in the book are quite long and leave room for deliberation. "Mulberry Boys" by Margo Lanagan packs so much in her narrative, presenting not just a new kind of vampire (and subverting the concept in the process), but creating this miniature dystopian society that leads to some difficult choices. There's also her prose style, which relies on implication, and leaves the details for the reader to sort out. A lot in "The Third Always Beside You" by John Langan seems boring on paper, especially when you consider a good chunk of the story revolves around dialog between a woman and her aunt. But that's where Langan's technique wins you over, from his astute observations on human behavior, the body language that occurs in a restaurant, to characterization that feels inevitable and holistic. I'm less forgiving of "The Siphon" by Laird Barron. On one hand, at times it feels indulgent, with its mythological allusions and its reliance on the stereotype, but on the other hand, it's a powerful pastiche, a modern Lovecraftian story that embraces this formula.

Blood and Other Cravings is the critical reader's anthology. What lurks on the surface isn't as important as what lies underneath and while the stories work on a literal level, jaded readers will find richness in what's implicit. This isn't a book on vampires as much as it is about vampirism, and that's a legitimate approach to circumvent the cliche.
Posted by Charles at 9:57 PM