Last January 10, 2012, I wrote to the Department of Finance the following:


I want to inquire what fees citizens will have to pay for personal use book imports in line with the new Department Order.

The P40.00 post office parcel fee is reasonable for example.

However, it's been my experience that other fees are inconsistently imposed. Some book shipments, for example, charge for the following: Customs Documentary Stamp (P250.00), Import Processing Fee (P250.00), and BIR Documentary Stamp (P15.00) (in addition to previous tax-related charges). At other times, it's just the post office parcel fee.

While I am not against an inspection fee per se, there is something ridiculous about paying P515.00 in addition to the P40.00 post office parcel fee for a book that costs less than P500.00. (I am hoping that such fees, if they aren't waived entirely to simplify the processed, should either cost less [this could be on a sliding scale], or only be applicable to certain book imports [i.e. sum total costs P3,000.00] AND is transparent in doing so [i.e. if it's a metric other than declared value, then it should be clear to both the public and Customs]. 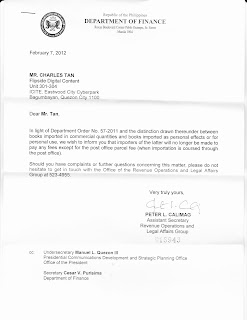 Thankfully that should clear things up.

Thanks Undersecretary Manuel L. Quezon III, who took care of the inquiry.
Posted by Charles at 7:55 AM

This is insane! Good luck!