Book Review: The Thorn and The Blossom by Theodora Goss 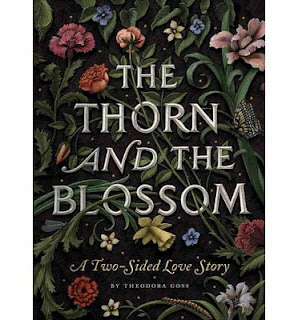 For me, there are two kinds of fiction readers: those that revel in formula, and those that are searching for something new. Not that the two are mutually exclusive but rather an expectation we bring when it comes to the reading experience. What's tricky when it comes to "originality" is that we often assume new material is what should amaze us: a new concept, a new technique, a new approach. But the truth is, even experiments can be poorly executed, and the reading experience isn't any better because of it. What's interesting with The Thorn and The Blossom by Theodora Goss is that it's a healthy compromise between both, and a good example of flawless execution.

What's immediately striking about The Thorn and The Blossom is its packaging: an accordion-style, spineless book which can be read in either direction. Part of the novelty is that it has two stories, each one showcasing a different perspective of the same narrative. Which, if we'll be honest, isn't new, but it's not common either. The entire package—the story, the layout, the author's style—however is what makes the book unique and worthy of interest.

In terms of the story, this is where the formula is evident. The Thorn and The Blossom follows the standard romance plot, and Goss doesn't deviate too much from the tropes established in the genre. In terms of execution though, her lines are beautiful and engrossing, and thankfully doesn't tread into preciosity. The characterization lures you in and if we were to assess it on simply that level, it's wonderful entertainment.

It's not immediately apparent but there's something rich beneath the seemingly-mundane text Goss presents to us. There's the ending, for example, which is not only open-ended, but noticing the implicit details in both stories changes the way the story is resolved. There's the issue of perspective, and if it's just characterization we're talking about, The Thorn and The Blossom is a good example of subjectivity and interpretation. There's also the parallelism between the legend in the story and the plight of the characters, which evokes sensibilities of speculative fiction without necessarily treading into that territory directly.

The Thorn and The Blossom is a compelling, entertaining romance that incorporates the best elements of print, design, perception, and clean writing.
Posted by Charles at 8:20 PM