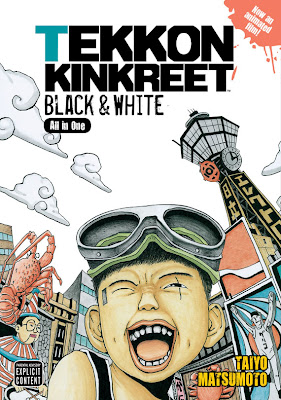 One of the reprints I've been waiting from Viz along with Uzumaki and Gyo (more of the former than the latter) was Tekkon Kinkreet or Black and White, the latter the title when it was first serialized in the US. Unlike the other titles in Viz's Signature line, I knew next to nothing about this title aside from its critical acclaim. When I heard that it had arrived yesterday, I borrowed money from my sister to purchase this rare tome. I actually had difficulty finding it in the comic shop mainly because it was so huge, too big to fit in the regular manga shelves. It's actually slightly larger than a regular hardcover book and the production values are quite high. The omnibus compiles all three volumes and it sports a full-color book jacket, a mini-poster, and includes an interview with Michael Arias who directed the anime adaptation. When I first opened the packaging, I could even smell the ink fresh from the printers. The presentation is really quite well done and the only criticism I have is that as a purist, I was disappointed that the title was reprinted in the American format (left to right as opposed to the Japanese right to left) although unlike other flipped titles like Osamu Tezuka's Buddha, this didn't interfere with the storytelling as far as I can tell.

Of course the beauty of Tekkon Kinkreet is its content. First, let's talk about the art style. It is explained that Matsumoto was inspired by French art design and while I am unfamiliar with the likes of Moebius, Matsumoto's style is certainly distinct from his peers. While the Japanese sensibilities are there, reading Tekkon Kinkreet feels more like reading an American indy comic. And despite the seemingly simplistic designs of Matsumoto, he is actually a master of the medium and there are interesting techniques he uses. For example, one scene I was quite impressed was how White, one of the protagonists, is revealed to be quite fast. At the forefront of one panel was a turtle attempting to pass a door and White is in the background. In the next panel, the turtle seems to have made small progress but White has passed him. It's these art techniques that reveal Mastsumoto's talent. However, this isn't just a classic simply because of its art. The story, while seemingly strange in the beginning, all builds up. It's evident that the story revolves around the two protagonists, Black and White, who are childhood friends and living in the slums. Change threatens to invade their town although not all the conflicts are external. There's lots of metaphors throughout the entire series and perhaps the most evident are the names of our main characters. Perhaps the strongest virtue of the series is the character development as various personalities change and evolve over the course of the story.

Overall, Tekkon Kinkreet weaves a multi-layered yet simple story that distinguishes itself via its unique art style. Granted that both the storytelling method or visuals isn't for everybody, it's a real treat if you find the time to read the whole thing through. If you're looking for a mainstream title, look elsewhere but if you want something with depth, Tekkon Kinkreet is easily a good recommendation.