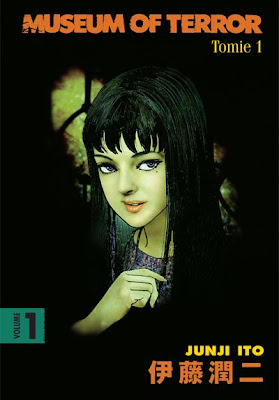 For me, Dark Horse acquiring Junji Ito's Museum of Terror series seemed intuitive--I didn't know why they didn't do so sooner. Junji Ito is currently one of Japan's masters of horror and perhaps is best known for his titles Uzumaki and Gyo (which Viz will be reprinting later this year).

Museum of Terror is a collection of Junji Ito's shorter manga work. If Uzumaki was a three-volume epic, Museum of Terror packs several short stories in one volume. In the case of volumes one and two, Musuem of Terror deals with stories revolving around an enigmatic woman named Tomie. For those 80's kids who were raised watching the cartoon Inhumanoids, Tomie is like a sexier and crueler version of the villain Tendril. Volume three on the other hand are simply independent horror stories with no unifying theme (which isn't necessarily a bad thing... one can only read so much Tomie stories). Unfortunately, those looking for more will be disappointed as Dark Horse has put the rest of the series on hiatus.

The stories and the art are classic Junji Ito. They're creepy and bizarre and each story has a certain twist. Unfortunately, because of the format, there's only so much build-up that can be done and Museum of Terror is no Uzumaki. That's not to say that they aren't good--they are--it simply didn't match my expectations and I think there's more that could have been done.

While Museum of Terror isn't as tight or as edgy as his longer work (namely Uzumaki and Gyo), it still has that morbid and creepy feeling to it that can undoubtedly come from Japan's maestro of horror.