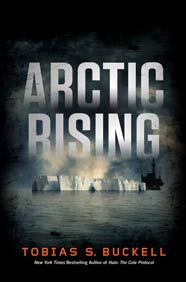 Tobias S. Buckell is a Caribbean-born New York Times Bestselling author. His work has been translated into 15 different languages. He has published some 50 short stories in various magazines and anthologies, and has been nominated for the Hugo, Nebula, Prometheus, and Campbell awards.


Hi! Thanks for agreeing to do the interview. For those unfamiliar with your latest novel, could you tell us more about Arctic Rising?

It's a futuristic technothriller of sorts, set in the Arctic Polar North after the ice is all gone, from the point of view of one Anika Duncan: a United Nations Polar Guard airship pilot who gets swept up in a conspiracy of sorts.

How did Tor end up publishing the novel? Was this something you pitched to them or a book they approached you?


I pitched it to them. I've been chewing over the idea for Arctic Rising, and showed it to my editor, Paul Stevens, along with a few others. I'd been hoping he'd go for this one, and he did.

Some of your previous stories also have environmental concerns as part of its theme. What's the appeal of the subject matter to you? How conscious were you of it? Are you planning on writing more in the future?


I grew up on a boat, and I'm always paying attention to maritime stuff. The gears in the back of my head clicked when I first started hearing about shipping traffic companies getting excited about being able to ship over the top of Canada (in some cases it would save them fuel and Panama crossing fees). That's a tipping point when you realize commercial interest in that sort of thing is getting big, and the companies are all moving forward with the assumption that this will happen. They're negotiating right of ways and there is motion to build a deep water harbor up in the area. The more I dug into it, the more I realized not only that it was seen as inevitable, but that the US Navy and military was posting these fascinating foresight studies about how it would all shake out, so I had my research already done for me.

What kind of research did you have to do for Arctic Rising?


As I mentioned before, I was digging into these declassified documents from Navies, and just accumulating interesting things I kept finding whenever I looked into polar resources, oil and gas corporations buying licenses for the next couple decades with the assumption being that there won't be ice in the summers there anymore within that time frame, and other stuff. It was fun just piecing it all together.

What were the challenges you faced in writing the book?


Getting lost in the research was easy. At some point I had to toss all sorts of fascinating stuff I wanted to write about. But I was trying to craft a lean thriller with lots of explosions. Had to go.

Fortunately I've got a massive clippings file on my laptop with scads more stuff for another book playing with these ideas. I really am interested in the idea of mobile offshore medium-run factories that can reconfigure themselves on the fly that are owner-operated and can save on shipping costs by moving to major shipping hubs, for example. I'd like to play more with that throw away idea.

Where are you now as a writer, whether in terms of craft or career (especially with your successful Kickstarter project)?


In terms of craft, I'm trying to spend more time wrapping my head around rewrites (which in the past threw me into long periods of struggling with the work before I was confident I'd incorporated notes from beta readers and editors) and giving the work the space it needs. I spent over two years writing Arctic Rising, which is really long for me, but included interruptions with my health getting in the way. But I really like the longer stew time for this book. I managed to pack a lot of things that I wanted in, and pared a lot of stuff off.

In terms of career? I'm in the trenches, so it's hard to tell what the 30,000 foot view is. From my perspective I'm digging out of this hole that my congenital heart defect put me in for three years. After I collapsed I had only a few hours a day I could work, and I had to focus on high paying freelance work to be efficient with what energy I had in order to put food on the table. So from here, it feels like I've been 'out of the game' for so long, that I have no idea how to conceptualize where it is. I focused on writing what I could when I could in between the freelancing for the last three years, but there a lot of days of doubt in there. And fear about whether I was doing the right thing, because if I'd stopped writing fiction all together I could have made more money. But I'm far too in love with crafting stories to give it up, so I feel like I've been juggling on the edge of a precipice for three years and sometimes I feel a bit fatigued. But I wanted to tell these stories, and you have to imagine that either you'll falter and eat the precipice or slowly climb your way out. It seemed worth it.

The Kickstarter project really helped. I offered readers the chance to pre-order the next book in my Xenowealth series, the sequel to Sly Mongoose called The Apocalypse Ocean. After its success, in November I crunched the figures and realized that I could drop most of my freelancing except for one gig, and spend at least nine months mostly writing fiction. It gave me the wiggle room, and I'm eternally grateful. If I can utilize the freed up time from not having to freelance all afternoon and roll that into more writing, I may be back to the point I was at in 2008 where I spent three quarters of my week writing, one quarter freelancing. And that's a nice place to be. We shall see if it lasts!

What projects are you working on?


Right now I'm working on the Kickstarter-launched novel The Apocalypse Ocean and another novel for Tor called The Infringement. I'm not even sure how to describe The Infringement right now. I have to get a bit further in just to make sure what I think the novel is about, is what it's really about.

I wrote my first script recently, for a small film group in Ireland that is working on adapting one of my short stories. It was a very cool new experience, and I've been lucky enough to be included in a lot of their process building up to this project. It's a whole new set of experiences.

Anything you want to plug?

As always, I'm blogging away www.TobiasBuckell.com for those interested in seeing what shiny things the internet is passing through my own person.
Posted by Charles at 5:15 PM

I am not sure I agree with Toby that his novel is a technothriller. To me, a technothriller really only applies to "near future" SF where the SF element is muted or understated.

Given the SF coolness and extrapolation in Arctic Rising, I don't quite think it fits.