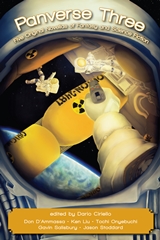 The impetus of the Panverse series, according to editor Dario Ciriello in the introduction, is to provide a) a market for high-quality novellas, b) a venue for new authors, and c) publish work that "told a story." As a reader, however, those aren't necessarily qualities that I look for in a publication, or rather, those qualities can be very subjective.

Take for example the first point: what does a "high-quality novella" mean? Each reader will have different standards, and for me, a novella is a commitment, so the text needs to justify its length. Just as some readers might feel there are "padded" novels which could have been tighter and shorter, one important quality for me in judging a novella is whether the author can either sustain the reader's interest, or provide a compelling reason for telling such a long story. There's the opening piece, "Orion Rising" by Jason Stoddard, which, honestly, fails to impress. It's not a bad story, but it is merely competent for what seems like a tedious story. I define it as tedious because there's no single element that is striking: the language and style is plain, the plot feels too predictable, and the focus is too diffused (which is peculiar considering there are only two points of view). The only justification for the story's length is due to the characterization, but it is transparently slow, and fails to reward the reader considering the investment in time. In other words, "Orion Rising" would have been better as a short story.

Which isn't to say this impetus for the anthology is a failure. "The Man Who Ended History: A Documentary" by Ken Liu conveys so much that many short stories, novellas, novelettes, and even novels, fail to do. First, there is the best practice of "show, don't tell," which the author breaks, but the text doesn't feel didactic due to the epistolary format. By showcasing snippets and different points of view, Liu converts what seems like a blunt, direct method and transforms it into something complex and subjective, mirroring one of the themes of the story. And whereas other writers might home in on one central point, the author provides dissenting paradigms that feels holistic without sacrificing his thesis. One of my problems with some of the novellas in the book is that they tend to revolve around a single idea or impression, which feels like wasted potential considering the format. Here, the conflict exist on several layers: objective history vs. subjective history, preservation of the past vs. concerns of the present, the individual vs. the community, etc. I'm not even touching the surface as it covers other sentiments like colonialism, the expatriate experience, cultural relations, the generation gap, and even "The White Man's Burden" (which is relevant considering the recent Kony fiasco). The more baggage the reader has, the more they have to process, and the richer this narrative becomes. Personally, the issue of comfort women in the Philippines follows the same concerns of the characters in the story. And while lesser writers might attempt to provide a neat answer, Liu shows us a more complex and human reality that feels neither preachy nor a cop-out. The author also gets away with what seems like predictable elements, such as the revelation at the end, which catches you off-guard and feels inevitable. This is a story I could discuss on and on, but my main point here is the discourse it elicits from the reader. If there is one flaw in the piece, it is the author's notes at the end, which can be interpreted as the author tipping his hand.

As far as the second rational for the anthology is concerned, we can make arguments as to what constitutes new authors, but in my subjective assessment, it meets my criteria. I've previously heard of Stoddard, Liu, and Don D'Ammassa before, but I'm honestly not that familiar with their work, nor would the casual genre fan immediately recognize them.

The last point, again, is quite vague for me (I think every successful text, no matter how experimental, surreal, or incomprehensible, at some level has some story to tell), but I'll interpret it as wanting submissions that are plot-driven. In that regard, the anthology succeeds, but it begs the question, does that necessarily make for a satisfying read? Take "Junction 5" by Gavin Salisbury as an example: in many ways, it follows the template of the opening story, and in that sense, also inherits its weaknesses. Perhaps what sets it apart from Stoddard's story is that it uses an unfamiliar setting—more "imaginative," perhaps implausible science fiction as opposed to alternate history science fiction—and so manages to evoke the reader's sense of wonder. And while that's an improvement over "Orion Rising," it's ultimately forgettable in the way most competent stories are. (And in retrospect, Stoddard's usage of the familiar leaves a stronger imprint than Salisbury's otherwordly setting.)

"Martyrs," by D'Ammassa, is what I'd call an idea story in the sense that the purpose of the text is to discuss the thought experiment presented by the author. That, in itself, is not necessarily a criticism, as many of the best science fiction stories are what I'd label as idea stories (and best fits the mold of stories with plot), but the weakness of this text is that it fails to be this rich, engaging narrative due to the author's methodology. D'Ammassa's technique is awfully transparent, whether it's the seeding of the character's personal interests and how it relates to the mystery, or that the characters are, for the most part, vectors for exposition. That's not to say the characters are simply the author's mouthpieces, as there's some personality invested in them, but as a writer and a critic, the story constantly makes you conscious of the author's intervention. Again, not a bad story per se, but it's a piece that's easily discernible and fails to strike a chord.

"Dust to Dust" by Tochi Onyebuchi is perhaps a criticism of personal preference. A personal, character-driven story using speculative fiction elements set in the backdrop of historic events seemed compelling initially but eventually felt dragging. I can see, however, how others can appreciate this story, at how Onyebuchi ties disparate threads, and plays around with the concept of alchemy.

As far as overall scope is concerned, Ciriello has crafted an anthology with a strong focus on science fiction. Perhaps the most fantastical of the five is "Dust to Dust" but there's still a strong argument for classifying it as science fiction. It also covers a wide variety of the field, whether it's hard science fiction to something more along the lines of space opera. While I am, admittedly, not as impressed with several of the novellas in Panverse Three, "The Man Who Ended History: A Documentary" is a must read, and easily exemplifies what the editor is attempting to do with the series.
Posted by Charles at 7:55 AM