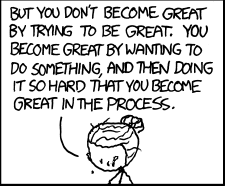 In a previous blog entry, I mentioned how I'm skeptical when it comes to physical beauty. I'd take personality and intelligence any day. But one quality I find very attractive (whether in a romantic or platonic sense) is passion.

On one hand, passion seems like an abstract concept. When witnessed firsthand, however, it can be overwhelming. What drew me to my current crush (who has zero interest in me so I'm heartbroken but moving on) is her answer to my question of what was the most recent movie she watched. Now I'm not a movie buff, but her answer was well-articulated and her enthusiasm was evident. She had a lot to say about the film she was talking about, whether it was the history or the content.

As a general rule, I find myself drawn to people with similar tastes and interests, but people with a passion are exceptions.

For example, I have zero interest in non-Japanese music. When everyone else was listening to the radio, all I had for company was the echo of my own thoughts. But just a few hours ago, I witnessed the performance of Mr. Big, and whether it was the artists themselves or the fans, their dedication was undeniable as everyone was full of energy, even if the show had been going on for more than an hour.

At the end of a different performance, I saw my crush give a genuine yell of approval for the band on stage. This makes me both happy and sad. Sad because it's a subject matter I can never relate to. Happy because even if I can't relate to it, it's clearly something she feels very strongly about, and part of her growth as a person, and I got the chance to witness it.

This attraction isn't necessarily on a sexual level. A few hours ago, two friends were tweeting about poetry. Now I'm not the biggest fan of poetry, and my reviews of poetry are on an intellectual level rather than an emotional one (which, I might add, is my loss). But reading my friend's tweets on their favorite poems, they convey this chunk of their lives that's integral and drives them to fulfill their potential.

Another instance was during the recent Metro Comicon, a girl was dancing with wild abandon to a game on the Microsoft Kinect. Everyone's eyes were on her as her moves were synchronized and fluid. I don't dance but my heart immediately went out to her because of her performance.

Sometimes, passion wears the guise of confidence or charisma. If you're dedicated enough to one subject matter, it doesn't matter what kind of hurdles are encountered as you'll attempt to overcome them. Similarly, you can acquire a following, not through your own affability, but because other people witness your dedication and zeal.

Every individual is interesting, but it's up to each person to convey where their passions lie. Tell me what interests you and why. It's not just words that are conveyed, but your sincerity, personality, and dedication. And that, to me, is beauty.
Posted by Charles at 7:56 AM

Very thought-provoking post. Passion is indeed very attractive, because I think we are all unconsciously drawn to something significant -- whether it is meaningful to us or to other people.

Passion is the purest acknowledgment of meaning.

And it's what all of us are searching for.

Passion tends to be infectious, joyful, draws people to it, and it's not something that can be faked, which makes it even more rare/special. Good reminder that holding back can be counterproductive. I need to live more passionately :)

You're pretty passionate yourself, Charles! :o)