Essay: On the Invisibility of Women 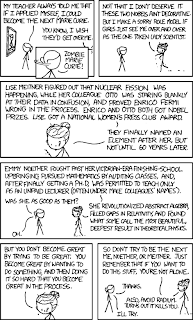 I love the comic above (you can click to enlarge it, or visit the source). I've seen various people post it around the Internet. Sometimes, they state the reason why they enjoy the comic. For me and some guy friends, it's mostly due to the quote from the second to the last panel:

It's a great line but it only tells half the story. As Zombie Marie Curie points out, there are other important women in the field, and they tend to be overlooked or shortchanged.

I mention this because recently (or rather, a few months ago), I screwed up. Redstone Science Fiction just uploaded Paul Clemmons's interview with me. For the most part, I'm happy with it, but there are errors in it--some factual, some typographical--that's part of the perils of transcribing a live interview (and for the record, I've also transcribed interviews in the past and made those same mistakes and more).

What bothers me, however, is the injustice I did to Mia Tijam, and this is entirely my fault. I could make the excuse that it was a live interview so my thoughts weren't articulated before I started blurting the first thing that came to mind, but it doesn't absolve me of blame. Here's my initial statement when it comes to Mia Tijam:


Mia Tijam used to be the girlfriend of a writer friend, and she is a talented writer herself.

I cringe whenever I read that. Because it's the type of answer that's entirely inappropriate (yet I said it). We don't define other writers and editors by their relationships but their accomplishments and roles. I catch myself in the succeeding sentences where I describe Tijam as an editor and a talented writer, but it's interesting how it's prefaced by her relationship status. The damage has been done. Ooops.

My apologies. It's unfair. I screwed up.

And yet, I also want to ask, how many people overlooked that mistake?
Posted by Charles at 2:38 AM

This is a brave and noble post, Charles, and really struck home for me. I live in constant fear of becoming "the wife of Hugo-nominated editor John Joseph Adams, and a writer." Thank you for acknowledging that it's a problem, and correcting yourself. That's all you can do. Well done.

Thank you for setting a good example!

I saw that comment this morning too. I've done that too, introduced someone first through how I came to know them (usually through a third party, right? 'Cause that's often how we meet people) and then for themselves. It is very interesting. I shall have to pay more attention.

I very much appreciate that you recognized the impact of the statement. It's understandable in that it's still the default position of most cultures, but so often no one ever remarks, or else a woman does and she's dismissed as over-sensitive (at best). Very few people mean it maliciously, but the impact is insidious.

Things will change only when people do what you've done; recognize the situation and then comment on it.

Thank you very much. I really enjoy your blog!

Posts like this are really important. Because if the dialogue about sexism/feminism/the invisibility of women is going to make actual progress, especially on the internet (which is not famous for sensible, restrained conversations) then we need more people to stand up and acknowledge that it's not the end of the world if you do/say something inappropriate - or get called on inadvertent sexism (or any other ism).

Because we all do it. Women as well as men are socialised to think certain ways, and even those of us who work really hard to be enlightened slip up from time to time. It's how we respond that is important. I have loved over the last year how many writers and people in our field have been prepared to say 'my bad, sorry' instead of 'OMG DON'T CALL ME SEXIST YOU TOOL, SOME OF MY BEST FRIENDS ARE FEMINIST, SO THERE.'

It makes a difference. Owning up to your slips and then saying 'ah, that's interesting what was going on in my subconscious there, let's see what we can learn from it, eh?' makes me happy.

I always liken pointing out someone's subconscious sexism to being the equivalent of telling someone at a dinner party that they have spinach between their teeth. It can be an uncomfortable moment, but unless they're a complete nincompoop, they should be grateful you said something rather than let them walk around with a big green wodge on their face, looking daft.

One of the benefits of Galactic Suburbia has been many people (not just men!) telling us that they think differently about their reading now, and the choices they make. It's overwhelmingly happymaking to have made something of a difference. But I like to think we also make it easier for people to talk honestly about their less than feminist moments. It really doesn't have to be a big deal, if you learn something from it.

You know I prefer to refrain from engaging in online discourse but here's a gesture that expresses how much your gesture is appreciated:

Your and the comments' points have reiterated awareness to crucial issues lived by women writers not just from the speculative-time of Mary Shelley but across the forms. I do hope that the awareness we speak of continues onto actions, to complete such gestures.

Thank you and apology accepted.

And thank you to everyone who continues to read Philippine Speculative Fiction.Mabalos!

"I always liken pointing out someone's subconscious sexism to being the equivalent of telling someone at a dinner party that they have spinach between their teeth. It can be an uncomfortable moment, but unless they're a complete nincompoop, they should be grateful you said something rather than let them walk around with a big green wodge on their face, looking daft."

Would you still feel that way if the person pointing out the "spinach" did so in public, in full hearing not only of all your friends and colleagues but of anyone who might already have reason to think less of you, rather than quietly ducking aside into a private place to warn you?

And if that's not bad enough, what if they heavily implied, in the process of "alerting" you, that you owed everyone an apology for the spinach having been there, and that they were fully prepared to start a campaign of hostility against you if they weren't satisfied as to its scope and sincerity?

And even worse, what if they made a point of publicly documenting the offending spinach's existence and where it had been thrown out afterwards, so they (or someone else) could always hold it up as an example of how disgusting you'd once been?

There are several words for a person who justifies self-righteously, priggishly pointing out others' flaws and slips as being solely concerned for their improvement, and who considers himself or herself entitled to condemn others when they react to this behaviour as it deserves. "Puritan" is the nicest.