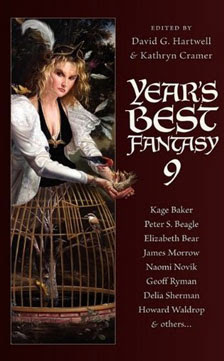 One of my fears is that there'll come a year when there won't be a "best of" anthology for fantasy. In the case of David G. Hartwell & Kathryn Cramer's Year's Best Fantasy series, it successfully dodged a bullet as Tor.com is publishing the book. This is a thick anthology, with 28 stories included. Whereas in Year's Best Science Fiction SF 14 they strove for "undeniably science fiction" stories, in the introduction to this book, Hartwell & Cramer claimed that their criteria for Year's Best Fantasy 9 was a broader definition of fantasy rather than an exclusive one. In a certain sense, that's true. Take Jeffrey Ford's "Daltharee" for example: it could have fallen under the science fiction label (but not the hard science fiction sub-genre) but is included here. There are also stories that experiment with form in one way or another, such as Lisa Goldstein's "Reader's Guide", Cathernne M. Valente's "A Buyer's Guide to Maps of Antarctica", and Kij Johnson's "26 Monkeys and the Abyss". However, in terms of source material, this is clearly genre's baby. A good chunk of the fiction here come from the usual publications such as F&SF and Asimov's, as well as other popular anthologies. It does feature material from non-US publications like Myth-Understandings, Tesseracts 12, and Dreaming Again, but they're the exception and is still associated with genre fiction. Suffice to say, there's little surprise here on my part, as Year's Best Fantasy 9 isn't as esoteric as I'd want it to be.

Having said that, this is a very solid collection of short stories. Compared to 2007 where we had stories like Ted Chiang's "The Merchant and the Alchemist's Gate" or Daniel Abraham's "The Cambist and Lord Iron", I don't think there's really a story that struck me as powerful as those two, but there's a lot of guilty pleasures and well-crafted stories (from a technical standpoint) to be found here. Naomi Novik's "Araminta, or, The Wreck of the Amphidrake" was a favorite of mine in the Fast Ships, Black Sails anthology, as was Peter S. Beagle's "The Rabbi's Hobby" in Eclipse Two. In fact, there's a lot of favorites in this book, but perhaps the one I'd like to mention would be the stories that caught me off-guard and probably wouldn't be included in other "best of" anthologies (and strangely enough, they're all for F&SF).

Al Michaud's "The Salting and Canning of Benevolence D." features a mish-mash of several laudable elements, from a faithful tone and consistent dialogue, to the inclusion of ghost story and alternate history elements. While the technique is praise-worthy, especially the combination of genres, Michaud maintains the fun factor and humor until the very last line.

Debra Doyle & James D. Macdonald's "Philologos; or, A Murder in Bistrita" won't win literary awards but it's an exciting romp that subverts the reader's expectations in key beats. There's lots of familiar tropes here, from mystery to the vampire, but the tandem of Doyle and Macdonald makes them appear fresh.

James Stoddard's "The First Editions" is another fun read by the time you approach the end of the book. What seems like a simple and predictable story evolves into a complex drama with lots of metaphorical innuendo.

While the overall story selection is a bit conservative, there's no denying that a lot of the stories included are great reads. The expanded page count gives the editors a bit more leeway but I wish some of those additional slots could have been devoted to pieces that wouldn't ordinarily fall under the genre reader's radar. That doesn't make this a bad anthology, mind you, and in fact I recommend readers to get a hold of this book, but the story selection is a bit too predictable.
Posted by Charles at 5:53 AM