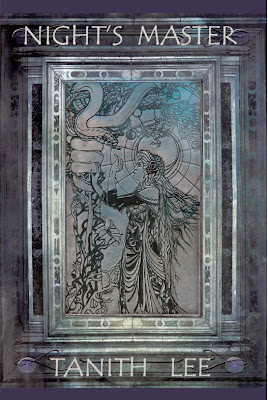 The speculative fiction field is quite diverse but because of this, there's also a lot of old books that never get read. Thankfully, there are publishers like Planet Stories that go out of their way to reprint a genre--such as pulp--that aren't in fashion. In the case of Night's Master: Tales from the Flat Earth, it is Norilana Books which reprints this title but unlike Planet Stories, there's a solid link between this book and the type of fiction the publisher, Vera Nazarian, writes (mythpunk). And that's what impressed me the most: Night's Master: Tales from the Flat Earth is old--first published in 1978--and while there are elements that make it dated, it's also progressive in the sense that we can see its influences on today's writers, from Vera Nazarian to Catherynne M. Valente. This is, to me, proto-mythpunk, in the same way the New Wave paved the way for the New Weird.

Tanith Lee's writing style is going to be a hit or miss (and this becomes evident in the first few paragraphs), mainly because of the tone she's going for. It's everything your writing instructor told you not to do: show, don't tell; info dumping; too much exposition; two-dimensional characters; too much contrived coincidences. Taken in isolation, these are practices you don't want to include in a story (at least most of the time). Here, however, there's a purpose to their inclusion. Lee is attempting to mimic the tone of the mythical and the legendary, perhaps a bit too faithfully, thus the writing feels archaic. Similarly, such tales frequently include Romantic elements, hence the lack of variation in the characterization and the frequent intrusion of fate.

And yet, within the framework Lee is working with, she also subverts it. For example, a trope of such narratives is the rewarding of good deeds but here, that's not necessarily the case. Good acts can lead to terrible outcomes, and evil characters might end up doing good. There's also an acknowledgment of differing morals: demons are considered evil by man because the former have different mores from the latter. Mind you, all of this in a book that was published years before I was born.

There's one element that modern readers will appreciate and it's the way Lee structures the book. Night's Master: Tales from the Flat Earth reminds me of the mosaic novel because it's filled with disparate stories that can stand on their own but collectively reveal a larger tapestry. There are three "books" here, each book divided into two parts, and each part divided into three (following a three-act structure). The three books seem unrelated to each other, save for the fact that they have a recurring antagonist, the demon Azrharn (the Night's Master in the title). Each part has a closer association with each other, usually the first part being an origin story but each part can stand on their own. To some, this all might seem simplistic but the way Lee weaves them and interconnects them is to be applauded. Perhaps the closest approximation here is imagine a book collecting all the stories of a symbolic deity like Anansi the Spider, and providing a unifying and coherent framework to understand the narratives.

It's understandable if Lee's writing doesn't appeal to some readers, especially with the simplistic flow of Night's Master: Tales from the Flat Earth, but if you're looking for something experimental or enjoy a romantic, mythical story, then you might want to give this book a try. This is a title that's ahead of its time, and three decades down the line, still holds up to what the author intended it to do.
Posted by Charles at 5:55 AM