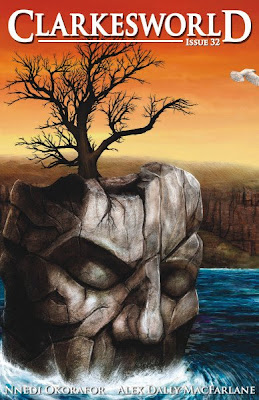 Up first is the feature story "From the Lost Diary of TreeFrog7" by Nnedi Okorafor. There was some delay in the podcast version of this story (it's up now) but looking at the final product, it's understandable. From the perspective of structure, specifically that of a story published on the Internet, "From the Lost Diary of Treefrog 7" isn't breaking boundaries more than exploring the possibilities of the medium. First, since it takes the form of an electronic diary (think of it along the lines of Star Trek's captain's log), it seems only fitting that each entry is accompanied by an audio version of the piece (lifted from the podcast), complete with electronic sounds effects at the beginning. Second, the story includes an interesting approach to footnotes and exposition. Okorafor alludes to a few fictional specimens in the story and while it's not essential for the reader to know about them (the story itself contains all the essential details), there's a link which you can hover your mouse on that brings up a fictional encyclopedic entry. It's not quite the multimedia experience that is Dr. Roundbottom, but it does play around with our concept of narrative and provides a means to incorporate a book like The Thackery T. Lambshead Pocket Guide to Eccentric and Discredited Diseases into a more conventional narrative. At the very least, the reader interface feels different but welcome.

That digression aside, it's all too easy to admire the widgets and forget the actual story. Okorafor goes for a character-centric piece and her conceit--that her protagonists are explorers who are keeping records--gives the perfect excuse to tackle the setting and its unique ecosystem. If you don't like the world-building aspect, one will likely drop the story early on but if you're like me, discovering the nuances of Okorafor's fabricated world is a pleasure albeit one that can get tedious due to the length. There's several points of tension in the story but because of the format, only one is truly explored. The interaction between the characters feel human and fleshed out, but the danger of a stalking predator loses much of its effectiveness because of the epistolary form. There's clearly a build-up in the story but somehow, it lacked the impact I was hoping for. Overall not a bad piece, but it lacks that compelling voice as there's still a certain sense of detachment despite the first person point of view.

Kate Baker's reading of the story is impressive. Aside from all the sound effects, Baker draws out the emotion from the protagonist, whether it's genuinely moaning in pain to sharing her frustration with her husband. There's also the usual praises for Clarkesworld such as fluency and clear audio.

The second story is "The Devonshire Arms" by Alex Dally MacFarlane. One of MacFarlane's strengths is the ability to decorate a secondary world with interesting details and snippets. Through sparse text, the author even conjures an interesting character or two. MacFarlane using some interesting tricks to distinguish dialogue between the characters, such as the inclusion of dashes between certain syllables, but overall it lacks a certain elegance and feels more like a crutch. My bigger complaint however is that I want more "meat" in my stories and this one feels devoid of immediate conflict or plot. Which is fine if all you're looking for in a story is ambiance but this isn't really my cup of tea. "The Devonshire Arms" is certainly memorable but it lacks the satisfaction I expect from short stories.

When it comes to the nonfiction, Jeremy L. C. Jones strikes the right balance in "What if it All Goes Wrong? A Conversation with Robert V. S. Redick." The beginning of the interview talks about Redick's view of writing in general and I particularly enjoyed his discourse on literary vs. genre. Later on, it transitions to more book-specific questions, but the answers are still accessible and one doesn't need to be a reader of Red Wolf to appreciate them.

A really exciting nonfiction piece is "Models and Clay and Plaster, Oh My! Creating the Cover Art for Tides From The New Worlds" by Brian Dow. Dow breaks down his process of how he illustrated the beautiful cover of Tobias Buckell's collection Tides from the New Worlds and he uses the attached photos to great effect. What makes this a fascinating read is the models Dow includes, from conceptual art to real objects to fabricated props (especially the spaceship!). It's akin to watching the Lord of the Rings DVD and drooling over Weta Workshop's designs. Granted, there's some self-propaganda here (Tides from the New Worlds's publisher is Wyrm Publishing), but it's beautiful propaganda that's eyecatching and informative.

Last but not least is the cover art, "Take Flight" by Adam Chowles. It's certainly an interesting image, a tree on top of a stone head, but due to the colors and the presentation, it's not as striking as the other Clarkesworld covers. This one feels subdued--not that that's a bad thing--and more relaxed.

There's some interesting developments in Clarkesworld with this issue and they look promising. The nonfiction content is stellar as always--perhaps more so in this issue--and while the fiction isn't as promising as I hoped it would be, it does give you much to ponder on, from form to presentation.
Posted by Charles at 4:34 AM