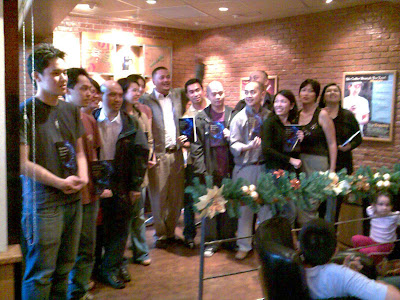 Taking the lists of names from Dean's preliminary table of contents, here's the cast who was available at the photo op (from left to right, unless you're Chinese, which I am, by the way): Joshua Limso, Russel Stanley Geronimo, "Masked" (sandwiched and "hidden" in between two authors), Joey Nacino, Yvette Tan (must plug my boss), Madeline Rae Ong (hiding behind Yvette... my angle's awful for not catching the pretty people at the launch), Dean Alfar, Oscar Alvarez (a.k.a. Tyron Caliente), Andrew Drilon, Vincent Simulban (we only see his shiny head as he's covered by Alex), Alexander Osias, Kate Aton-Osias, Nikki Alfar, and Jessi Albano (who is protesting the picture).

Oh, and there were eight male authors who showed up, and five of them were bald (by choice). So if anyone needed signatures, I told them to look for the bald men. =)
Posted by Charles at 9:21 AM

Psst! Change my name (or at least not with the link...)

heard about your "quantum mass theory" regarding your body weight...maybe it applies for me too..heheheh

btw, i was the skinny dude on the enormous orange hoodie kahapon!