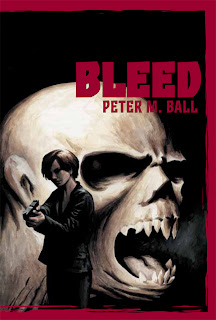 Sequels can be tricky. Bleed's predecessor, Horn, deserves all the praises it received: it's tight, compact, subversive, and invigorates new energy into the urban fantasy genre. The dilemma of Peter M. Ball is how do you follow up on that success.

Now there are several avenues to tackle a sequel, just as readers will have different expectations. Take for example Orson Scott Card's Speaker for the Dead, which has little resemblance to Ender's Game, and could only be called a sequel in the sense that it includes a character or two from the previous book. There is also the case with Jeff VanderMeer and his Ambergris novels, each one distinct from each other, but are nonetheless sequels because of the common setting and fresh, creative energy that drew our attention in the first place. More common are the safe sequels, books that continue the formula and plot that were present in the original, delivering more of the same while progressing the story. Bleed falls under the last one and that's not necessarily a bad thing. Ball, after all, left his protagonist in an interesting place at the end of Horn, and Bleed explores those consequences.

The author maintains the strengths of Horn: Bleed is relatively short, quick to the action, and uses flashbacks to keep readers up to speed on current events. Knowledge of the previous novella is not necessary to appreciate the story and this stands quite well on its own. It also successfully fuses elements of the noir and urban fantasy genre to create its own stylish atmosphere.

Having said that, what originally drew me to Horn was the freshness of it and how everything comes together. Bleed, for the most part, feels a bit derivative, and lacks the edginess of its predecessor. It's still an entertaining read, mind you, but in terms of quality, there is no doubt that I'd recommend new readers to try Horn first rather than Bleed. This is, of course, down to reader expectation, and those looking for their Miriam Aster fix will find that Ball delivers. Personally, I was hoping that Ball would write a sequel that surpassed his previous work, but Bleed isn't that kind of novella.

On its own merits, Bleed for the most part is an entertaining urban fantasy that's tight and doesn't waste the reader's time with unnecessarily details or action. Ball gives readers a complex protagonist that is both pulpish and modern, and definitely one of the more memorable characters in fiction.
Posted by Charles at 6:49 AM