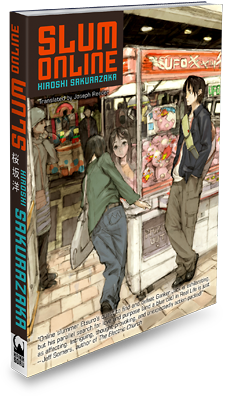 For the past few weeks, I’ve been indulging my video game addiction (Starcraft II and DotA for those who care curious) so reading Slum Online felt appropriate. In a certain way, this is one of Haikasoru’s most accessible novels, not only because of its brevity (even considering the bonus story at the end), but due to the flow of the plot and subject matter. I wouldn’t call this a cutting-edge or revolutionary science fiction novel, but as long as you’re looking for something entertaining, you’ll do fine.

The strength--and weakness--of Slum Online is its premise: the protagonist aspires to be the best fighter in the fictional MMO Versus Town, a game that feels like a hybrid between Street Fighter and World of Warcraft. Complications in the novel include a mysterious character who ambushes the top players, as well as the protagonist’s real life relationships. A bit simplistic to be honest, and astute readers won’t find the plot twists or reveals surprising, but this is one of those books where it’s the journey that’s appealing rather than the ending itself. Slum Online excels in conveying the virtue of humble accomplishment, of proving to yourself that you’re the best, even if the public isn’t necessarily aware of it. The novel also caters to the video gaming crowd, a casual look at a gamer’s mentality as opposed to weighty science fictional concepts.

There are two points that I’d like to highlight when it comes to Hiroshi Sakurazaka’s writing. The first is how he manages to capture the authenticity of the gamer mentality. It’s not simply the telling details of the video game that he fabricates, but also how his protagonist behaves in the real world: his paradigm is that of a strategist, always looking for exploits and understanding the rules of the situation he finds himself in.

Related to the first point is how Sakurazaka explains to the reader the jargon of Versus Town. Credit in my opinion goes to the translator as he makes such explanations accessible and comprehensible to an English reader. Because Slum Online takes place in a fighting game, a different set of tools is needed to describe the action scenes, especially without being too repetitive. Terms like combos and blocks are staples of the fighting game genre, but advance techniques such as reverse-counters can be found in current games like Street Fighter IV and aptly fits the narrative.

The heart of Slum Online however is its focus on character. The science fiction aspect is mostly in the background (and could easily take place today) and what keeps the reader hooked is the drama unfolding for the protagonist. Again, this particular element isn’t groundbreaking, and is actually quite predictable, but that should set the reader’s expectations.
Posted by Charles at 7:36 AM