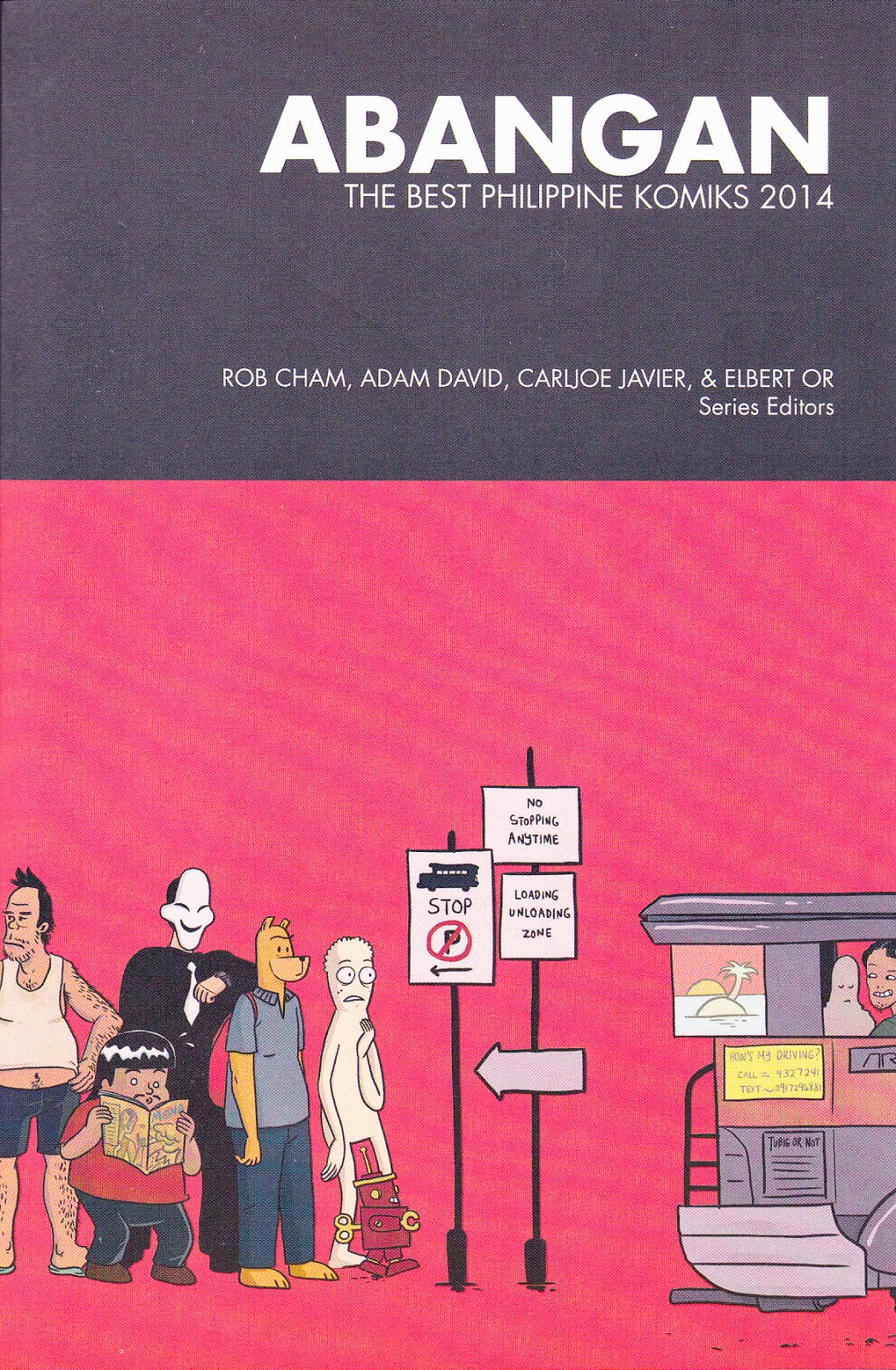 How important is context? On one hand, Formalism values independence, self-sufficiency, and personal interpretation. On the other hand, some of the most potent art is its interaction with the zeitgeist, at how it builds on what came before it, and how its contribution causes ripples.

It would be insufficient to gauge Abangan: The Best Philippine Komiks 2014 based on the former; that's not to say it wouldn't pass with flying colors--there are several outstanding, standalone comics in this anthology including the excerpt from Windmills V by Josel Nicolas or Blue Dusk by Mica Agregado--but when we talk about a retrospective anthology, a "best-of" at that, what should be at the heart of the discussion is its dialog with the rest of the field. And at the very least, whether you agree with the editor's choices or not, Abangan creates this standard for talking about local comics. One tragedy of the Philippine comics scene is that often, unless your work is published by a major publisher (in the case of this anthology, Visprint), your work will eventually be forgotten and unarchived. The strongest benefit of Abangan is how it leaves a recorded footprint (and admittedly, in the case of some, getting reprinted results in better print quality compared to the original publication venue, just as some lose out in its transition from full-color to black and white).

Abangan addresses this much-needed gap in Philippine history, and in the context of frequent discussions in the local industry, hopefully puts an end to the thesis that Philippine comics is (un)dead, or that the golden age is past. There's a plethora of work that's been published in 2013, and here's the evidence.

But for anyone who doesn't want to talk about the larger implications, let's borrow the perspective of the Formalist and look at some of the comics in the anthology, much like any of the reviews that came before this. There's lots of impressive comics here, as well as problematic ones. On one end of the spectrum, you have the selected cartoons from Dead Balagtas by Emiliana Kampilan: four-to-five panel strips that hit the humorous beats while tackling issues like colonialism and imperialism. Or a title like excerpts from "Diwata" by Manix Abrera (and to a lesser extent, the excerpts from Wignaut by K.A. Montinola and Martha Maramara), which showcases how effective silent comics can be. On the other end of the spectrum is the excerpt from Filipino Heroes League Volume 2 by Paolo Fabregas, and I'm both impressed and disappointed at the scene selected for this anthology. In the context of the Filipino Heroes League series, it works; here, while I congratulate the editors in selecting a scene that stands on its own, the statement I'm getting from this comic is the subversion of the Edsa Revolution, at how a significant turning point in our history by the masses was retconned to be the machinations of a few, despite the best intentions underneath that gesture. And then you have the works that are somewhere in between--at the very least fun and entertaining and referential--like the excerpt from Darwin's Association of Delicious Evilness by Carlorozy and "Trese: Thirteen Stations" by Budjette Tan and Kajo Baldisimo.

That Abangan stands well on its own is deserving of praise and why it's been positively reviewed. But if we dig deeper, the anthology has several shortcomings, and it's perhaps indicative of the biases, whether conscious or unconscious, of its editors that also happens to be representative of the strengths and weaknesses of the local comic industry. To be fair, these are flaws that some readers will not notice, dismiss, or perhaps even afraid to point out. But this is where the value of dialog comes in.

While I'm not looking for objectivity--that is the point of editors after all, to provide a subjective vision or direction for the text--I do look for consistency. One complaint that can be levied against the local publishing scene for example is favoritism, and one example of this is how an anthology was reviewed in a broadsheet without the reviewer disclosing that they were a contributor to the said anthology. While that's not the case in Abangan, there are several instances here which defy standard expectation.

For example, my expectations for Abangan is that it compiles the best comics of 2013. It doesn't bother me that comics published in 2014 were included (the time frame of the anthology could easily be set to Feburary 2013 ~ January 2014), but work that hasn't been published yet does, which is the case with the comics of Manix Abrera, and Noel Pascual and AJ Bernardo. That's not to say that their work isn't deserving, but why is there this kind of exception, or at the very least, is not addressed in the introduction? These are also the first two comics featured in the book, so what kind of message does that convey? Related to this are the submission guidelines (or lack thereof) for the sequel: does it include comics published from April 2014 ~ March 2015, or can comic creators submit original work directly to the editors without needing previous publication? It also begs the question, maybe the comics on Abangan isn't based on previously published work, but based on the comic creators the editors judged to have stood out the most in 2013, which drives the discussion in a different direction.

Then there is the case of the four series editors, and while I can't begrudge having numerous editors working on the same book, this choice affects my other problems with the anthology. When we talk about the series editors in this anthology, namely Rob Cham, Adam David, Carljoe Javier, and Elbert Or, it's not quite clear what their role is. Not that the reader needs to know this, but when discussing the other implications of the book, it starts to matter. Typically, when running a series ala The Best American Series, there are typically series editors guiding and overseeing the work of the guest editors. In this case, do all four series editors take on the duties of the guest editors? If so, here are some points I want to discuss.

First, there's the bias of the local industry towards the interests of the Catholic cis-male based in Metro Manila. The introduction to Abangan admits that, but just because it's admitted doesn't give them a free pass. When you have four editors working on an anthology, you couldn't make the selection of editors more diverse (since a more diverse set of editors can theoretically lead to more diverse selections)? And looking at the anthology, it's not really diverse, whether you're looking at it from a gender parity perspective (and also makes you wonder, whether intentionally or unintentionally, why Martha Maramara is the only contributor to have an omitted bio), or the fact that majority of the reprints were from print-based sources.

Second, the issue of favoritism can be raised. Typically, an editor refrains from selecting their own work as it can be interpreted by some as a conflict of interest. Abangan includes not just one, but two, works from Rob Cham. Now there are several valid reasons for doing so. It could be the editors wanted to showcase the talent of Cham's collaborators. Or it could simply have been chosen by Cham's co-editors, because Cham is a talented comic creator. But having a clear distinction on the editorial process (whether the traditional roles of a series editor or guest editor) could clear up this possible controversy, or at the very least, tackle it head on.

With regards to the editorial, there are also some choices that while it isn't erroneous per se, makes you wonder. The excerpt from the previously-unpublished Crime Fighting Call Center Agents by Noel Pascual and AJ Bernardo interests me because of the language chosen for this strip. While their series has previously been translated into English, Crime Fighting Call Center Agents is usually released in Filipino, and then translated at a later date. That English is the language of choice here defies expectations for their work, and makes you wonder at the choice.

And since this is the de-facto record of comics published in 2013--whether the editors wanted this burden or not--it's important to get the details right. While most of the copyright page is correct, I wish it was more comprehensive in the case of some of the works featured (a "previously published" or "originally published" here notice would work for example). There's also the previously mentioned lack of a biography for Martha Maramara (if the creator declined to have a bio included, it could simply have been stated). One could argue these are just nitpicks, but they go a long way when it comes to the academe or simply recounting our history.

For the most part, Abangan: The Best Philippine Komiks 2014 captures the macrocosm of the Philippine comic industry, including both its praise-worthy aspects and flaws. At certain points, it also captures the chopsuey nature of the industry, but it needs to be worthy of the conceit of its title: it needs to move the field forward as much as it looks back on what came before.
Posted by Charles at 4:06 PM