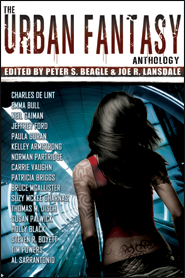 We all have preconceptions when it comes to the term urban fantasy: I've seen some people use it as a synonym for paranormal romance while others have attempted to return it to its "roots" or subvert it (such as anthologies like Paper Cities, Leviathan 4, or another book I'm currently reading, Naked City). But Tachyon Publications, over the past few years, has done some interesting scholarly reprint anthologies like The Secret History of Science Fiction and The Secret History of Fantasy, so I approached this book with the same kind of paradigm.

Editors Peter S. Beagle and Joe R. Lansdale tackle the dilemma of urban fantasy by dividing the book into three sections: Mythic Fiction, Paranormal Romance, and Noir Fantasy. In retrospect, this actually makes sense if we're talking about the history and evolution of the sub-genre. What immediately caught my attention was the introduction preceding each section. Charles de Lint, Paula Guran, and Joe R. Lansdale respectively share their insights in their field of expertise. In that context, the anthology is invaluable.

Where the book becomes a strange beast is the story selection, at least in tandem with the corresponding field it represents. Don't get me wrong, there are some powerful stories included in the book: "A Bird That Whistles" by Emma Bull, "Boobs" by Suzy McKee Charnas, and "The White Man" by Thomas M. Disch are easily favorites, but the question is how do the rest of the stories fit with the themes of the anthology? I had no problems with the Mythic Fiction section, with Neil Gaiman's "The Goldfish Pool and Other Stories" and Jeffrey Ford's "On the Road to New Egypt" standing out, but problems with expectations pop up when it comes to the other two sub-genres. As Guran writes in her introduction, "I'm not even sure all the fine stories selected for the pertinent section of this anthology can be assigned to this subgenre." It's not the quality of the stories that gets called into question (although this book does have its share of mediocre choices), but how it fits the parameters of a certain field. I was hoping Mythic Fiction, Paranormal Romance, and Noir Fantasy would provide concrete guidelines and boundaries, but when you start reading the stories included in the Paranormal Romance and Noir Fantasy section, it only adds to the bafflement.

Now lack of genre boundaries isn't necessarily a bad thing--it's why I love interstitial fiction or prefer the term speculative fiction (or fantastika if that's what floats your boat). But in this kind of anthology, especially one where the types of stories are theoretically divided into categories (although a lot of writers, of course, resist categorization, and as Lansdale puts it, "I am not a proponent of isolationist fiction"), these are hopefully the guide points for readers. Of all the three, Noir Fantasy is what seems the vaguest for me, although I certainly enjoyed the various stories, such as "The Coldest Girl in Coldtown" by Holly Black and "On the Far Side of the Cadillac Desert with Dead Folks" by Joe R. Lansdale.

It's possible that the editors were aiming for breadth of scope rather than narrow, definitive flavors in each sub-genre, but overall, there's a sense of trial and error more than serendipity. From the book, I get Mythic Fiction; some of the stories in Paranormal Romance feel forced or could have belonged to the two other categories; and I honestly don't know what's going on with Noir Fantasy.

If you're reading The Urban Fantasy Anthology for the stories, it's fair game as it has its share of gems and disappointments (thankfully more of the former than the latter). If you're interested in the evolution of urban fantasy, the introduction to each section is invaluable, and despite my complaints about the story selection, the individual sections do help. As far as execution of its theme and concept however, The Urban Fantasy Anthology falls short of being a definitive, go-to guide.
Posted by Charles at 12:36 AM