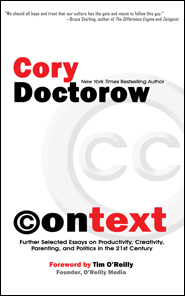 I'm an omnivoracious geek: tabletop gaming, anime/manga, comics, science fiction and fantasy and horror, technology, etc. are all within my circle of interests. Now Cory Doctorow's realm of expertise doesn't necessarily coincide with mine, but you know he's also as omnivoracious as I am. Context is a compilation of Doctorow's various essays, whether it's parenthood in the 21st century, his geeky gadgets, life as a writer and a reader, futurist, or simply being an efficient entrepreneur. The book, after all, starts out with "Jack and the Interstalk: Why the Computer is Not a Scary Monster," which is how the author uses technology to aid him in raising his daughter, and ends with "Close Enough for Rock n' Roll," which narrates how new media is changing (or already has done so) the industry.

As an artifact, Context is interesting: why pay for content that you can get for free? I'm more than familiar with Doctorow's nonfiction and in fact read several of what's reprinted here. But that's also part of Doctorow's Creative Commons philosophy and so puts into practice what he talks about. There's also comfort in finding everything in just one place. Does that make the book perfect? No, not really. Several of the essays date themselves as far as the context is concerned, with allusions to articles and events that aren't included in the book. But so what? The smart reader will catch on and Doctorow doesn't hide the fact that these are reprints from blog entries and published articles. Similarly, that's also the strength of this nonfiction collection: each essay is brief and precise, probably no longer than a thousand words each, so going through them isn't a chore. Whatever you feel with regards to the author's beliefs or agenda, you can't deny that the content isn't engaging or accessible. They're also very compartmentalized so one can move on from one topic to the next, with little concern for chronology.

Holistically, the book captures the multiple facets of Doctorow. Ideally, the book would have grouped the essays in categories, but it's short enough that this mixture of agendas and topics isn't that big of an issue. Because of the scope in topic, it's also difficult for me to imagine for a geek to not be interested in at least one article included in the book. It might be about parenthood; it might be about how the various corporations are behaving; it might simply be a technology question; or a consideration close to my heart, how the Internet can be leveraged for writers. Of course on the other end of the spectrum, if you're the type that has really narrow tastes, then it's very possible you won't feel you got your money's worth for such a diverge range of topics in which you might only be interested in just one.
Posted by Charles at 6:28 AM