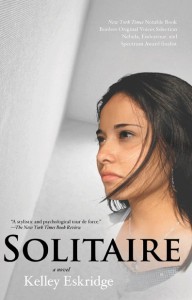 Small Beer Press only publishes a few books every year so I start paying attention at their lineup. Some are debuting authors or new books. At other times, it's like Solitaire by Kelley Eskridge, which is a reprint. When a company makes such a decision, you have to wonder: what made this book compelling enough to reprint? Or better yet, how could I have missed this in its initial release, and is it worth reading in the modern context?

In a certain way, Solitaire is ahead of its time. It's a title that old, conventional marketing will tell you won't sell: it features a multicultural, non-white, female protagonist who happens to be a lesbian; the author is telling us the details rather than showing us; it's a science fiction concept within a science fiction concept. Yet it is for these reasons that the book succeeds. Let me break it down into its components.

The first is characterization. Eskridge immediately thrusts us into her main character's conflict, a familiar scenario every teenager feels but magnified in a way that only fiction can exaggerates. While the author is direct when it comes to her narrative, the details are subtle. There's little exposition and her characters are left to fend for themselves--and it works. Dialogue is sprinkled with foreign words and phrases--as any believable multicultural character would normally speak--and it's presented in a way that's not patronizing. Everyone, from the main to supporting cast, has believable motivation and everyone operates in shades of gray rather than clear-cut black and white. I made a note in the previous paragraph that the protagonist in the story is multicultural non-white, female, and a lesbian, but what really matters to me as a reader is that I feel that this is a genuine character, rather than simply included for the purposes of one's agenda, the plot, or for the sake of introducing a non-mainstream character.

This approach to characterization is similarly employed in presenting the setting. There is no wall of text that explains how the world works. Instead, it's presented in such a way that the reader can deduce from the context clues what sort of world Solitaire takes place in. It's not a dystopia, a utopia, or some amalgam of cyberpunk, but a fleshed out world with its own unique benefits and challenges.

I have, as a writer, been instructed numerous times to "show, not tell". I would describe Eskridge, based on this novel, that she is a tell-type writer, but it doesn't matter. After the first few pages, the reader is immediately engrossed in the narrative, which is what matters. There are also occasional moments of preciosity but they are irrelevant. There's a lot that Eskridge wants to convey and the book is constantly keeping readers up to speed with what's happening. That's not to say Eskridge's writing is perfect, but in this instance, it's adequate for what she's attempting. Solitaire is mostly a plot and character-driven book rather than one peppered with purple prose.

And then there is the science fiction element of the book. Eskridge has worked out the details of her setting and its many implications. While it's clear from the very start that the book takes place in a science fictional world, I'm surprised--and applaud--Eskridge for steering it into new territory that wasn't immediately apparent but hinted at from the beginning. Suffice to say, I enjoyed the latter part of the book more than the opening pages, but it's impressive how the author ties the two together organically and how you can't just omit the earlier parts. The conflict later in the book also has many parallels to real-life conditions and philosophy, but I'll leave that for readers to assess. Those who read science fiction because of the "concept" will find lots to enjoy here.

Personally, what sells Solitaire is Eskridge's characterization and how her characters, whether heroic or villanous, are sympathetic. The author doesn't take the easy way out, and she articulates the complex nature of our relationships through the various characters and their feelings.
Posted by Charles at 6:47 AM