Book Review: The Best of Beneath Ceaseless Skies, Year One edited by Scott H. Andrews 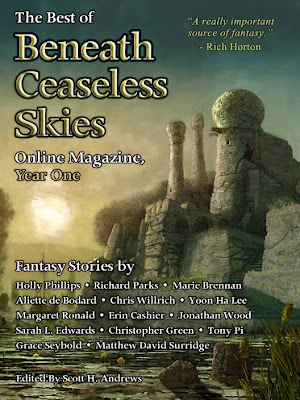 In a certain way, I'm the benchmark reader for The Best of Beneath Ceaseless Skies, Year One. I haven't read any of their issues so this is their chance not only to impress me, but to convey what their specialty is. This goal might sound simple but it's difficult to pull off. I remember reading Orson Scott Card's Intergalactic Medicine Show anthology and it was an amorphous publication that didn't leave a distinct impression, either in the quality of their stories or what their niche was (save for the fact that it had more Ender stories). Thankfully, The Best of Beneath Ceaseless Skies, Year One leaves an impression. Even without looking at their web page, it's evident from the stories what the direction of the publication is: high fantasy. Not just high fantasy that's derivative of sword & sorcery or post-Tolkien, but high fantasy that brings something new and different to the table. I love this niche because aside from Blackgate and the occasional short story collection or anthology, coming across such a sub-genre is rare--at least as far as the short story format is concerned. (That's not to say Beneath Ceaseless Skies is exclusively high fantasy; there are some urban fantasy stories included for example.)

While we have a clear picture of what kind of publication Beneath Ceaseless Skies is, the second challenge is whether their "best" is good enough. It can be safely said that there's no false advertising here as the book does feel like it's the cream of the crop. It's not just about delivering a story that's memorable, but each story is distinct from the rest. I mentioned in the previous paragraph at how a lot of high fantasy can feel derivative of Tolkien or the sword & sorcery sub-genre, but each story is refreshing and drastically different from the story that precedes or comes after it. Take for example the opening piece, "The Sword of Loving Kindness" by Chris Willrich. While at first glance it bears resemblance to Fritz Leiber's famous duo, Willrich steers the narrative into an entirely different direction. It has its fair share of amorality but the way he injects humor while still maintaining the seriousness--and danger--or the narrative is commendable. Nor are the characters, either the protagonists or antagonists, reduced to stereotypes and are instead fully fleshed out. Compare this to "Silk and Shadow" by Tony Pi which embraces the epic nature it's drawing inspiration from. The characters do not veer away from your initial expectations but what sets the story apart is its magic system and how the hero uses this to outwit his enemies. One could say this is a plot-driven narrative with a well thought-out cosmology and creative mystery. What adds oomph, however, is the way Pi fashions the ending which leaves room for ambiguity and fits the notions of a Tragedy.

There are a lot of other strong stories in the anthology, especially those by female authors: "Dragon's-Eyes" by Margaret Ronald, "The Alchemist's Feather" by Erin Cashier, "Blighted Heart" by Aliette de Bodard, and "Thieves of Silence" by Holly Phillips are easily the strongest stories in the book--or any other anthology it might be included for that matter.

What's impressive with The Best of Beneath Ceaseless Skies, Year One is that there's no story that settles for mediocrity or competence. Each story works on an elevated level, and challenges the notions that high fantasy is cliche or just escapist. Looking at it from a holistic level, the anthology works not only because the title is apt, but because unfamiliar readers will immediately understand what the magazine is about as the selected stories speaks for the editor.
Posted by Charles at 7:24 AM

Thanks very much for the review! "...challenges the notions that high fantasy is cliche or just escapist" is exactly what we're aiming for. :)