Book Review: Summer, Fireworks, and My Corpse by Otsuichi, Translated by Nathan Collins 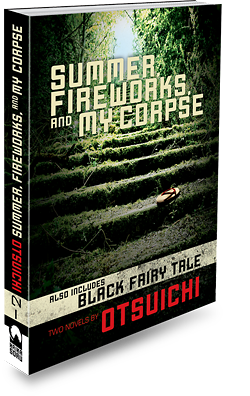 This isn't the first time that Haikasoru published Otsuichi's fiction. During their first year, perhaps the most experimental book for the publisher was ZOO, Otsuichi's short story collection. Otsuichi's writing isn't easily categorized as science fiction or fantasy, but is a better fit for horror. Summer, Fireworks, and My Corpse doesn't stray from that formula, but whereas ZOO featured his short stories, this book focuses on two of Otsuichi's short novels and a short story. In a certain way, the title is misleading because the most intriguing piece for me is the second short novel, "Black Fairy Tale", but I'll get to that later in the review.

The opening story is "Summer, Fireworks, and My Corpse" and it's probably best described as a thriller. Even before I started reading it, I was already deliberating on how there's more flexibility when you're reading a narrative from Japan. While there are certainly thrillers and mysteries wherein the criminal getting away with the crime, Western fiction--and its emphasis on morality--usually gives me the expectation that the perpetrator gets caught in the end. Here, it works in the story's favor that there's no set expectation. Otsuichi knows how to bait the reader by providing suspenseful moments and milking them for all they're worth. "Summer, Fireworks, and My Corpse" is an entertaining read, but at the end of the day, it's formulaic; it's an enjoyable thriller, mind you, but obviously so. Which isn't to say it's not without its own saving graces, such as the characterization and the various hints by the author, but at the end of the day, it's not remarkable. Perhaps some readers will be amazed at the moral ambiguity Otsuichi straddles but for me, it's evident that the author is a puppeteer.

The second story is "Yuko" and perhaps the least memorable of the three (probably due to its length). Much like the previous piece, Otsuichi knows how to work his beats, because just as the reader thinks they've figured things out, the author throws in a new element that subverts the narrative. What makes the story work is that the reader is unsure of who they should be rooting for: is our protagonist the heroine or is there more lurking beneath the layers? Because it's a shorter narrative, the story doesn't feel repetitive and each revelation actually matters. And when it comes to the ending, Otsuichi creates a plausible explanation for everything, which is probably what will make or break the story for readers.

The last piece is "Black Fairy Tale" and I mentioned in the beginning that the title Summer, Fireworks, and My Corpse was deceptive. "Black Fairy Tale" is longer than the previous stories combined, and in many ways, is more ambitious. But I can understand why Haikasoru chose "Summer, Fireworks, and My Corpse" to be the titular story, whether it's marketing or having a thematically tighter piece to hold the book together.

Returning to "Black Fairy Tale," because it is a longer narrative, Otsuichi runs into the challenge of sustaining the reader's sense of suspense and interest. Thankfully, he skillfully manages to make it compelling without feeling redundant. The key to this is how he juggles chronology and point of view. When you first start out, the reader is confused (in a good way) and it's not only later on that the separate pieces start falling into place. I'm impressed at how Otsuichi leaves an impression with his recurring themes: eyes and memory. It creates a story that's not just a mystery/thriller, but evokes elements of science fiction and the fantastique. One of the protagonists, for example, is a girl who suffers from amnesia and she eventually comes to question her identity. Otsuichi tackles this through various methods and in a way that wouldn't work in a realistic novel. The story also evokes a sense of visceral disgust even when the author is not detailed with his descriptions. Various techniques employed in "Black Fairy Tale" are difficult to pull off but Otsuichi manages to successfully integrate them and utilize them to great effect. At the end of the day, it's this story that intrigues me rather than the other two.
Posted by Charles at 6:57 AM