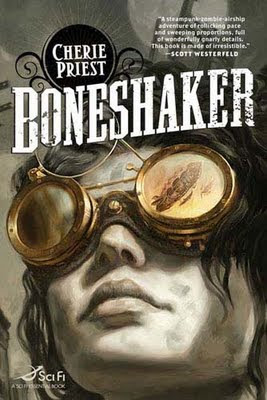 One of the novels that received a lot of buzz last year is Cherie Priest's Boneshaker and after reading the book, it's easy to see why. When you get right down to it, Priest's writing is compelling. The only time this isn't true is in the prologue, which is a sacrificial lamb of sorts. It's exposition of the setting and it's a technique used in other science fiction novels such as Alfred Bester's The Stars My Destination. I'd say it's a small price to pay as when you get to the first chapter, Priest immediately ensnares you with the narrative and the characters.

There are two reasons why Boneshaker works. The overt one is Priest's characters. The author manages to strike a balance between her two protagonists: while they're proactive and strong in their own way, they're also not without vulnerabilities. The chemistry between mother and son is played up giving us tension that's emotionally driven and organic, rather than simply depending on external forces as a source of conflict. Moreover, Priest's choice to juxtapose the point of view between chapters maximizes the suspense, as well as giving us opportunities to view the setting through a different lens.

The second reason why Boneshaker works is due to the subtlety in the author's technique. Take for example the first chapter; it's mostly dialogue, or "talking heads" as I'd like to call them, but it's compelling dialogue that immediately conveys the conflict and is as riveting as any action scene. The fact that this goes on for the next few chapters is a testament to Priest's skill in writing engaging conversation.

Another element in Priest's favor is how she continually plays cat-and-mouse with the reader as she dangles an easy solution in front of her characters, only to escalate the stakes by the end of each chapter. There is also the sense of paranoia and alien-ness that she constantly reinforces. Her protagonists are strangers to the city that they are exploring and one of the recurring themes is that they can't fully trust the people that they encounter. It's a successful execution of portraying her characters as outsiders, and that there are ramifications for their ignorant actions.

Last is how Boneshaker fits in with the current zeitgeist. The most obvious is its steampunk elements but as far as the narrative is concerned, this feels natural rather than artificial. There is also the inclusion of zombies but no one in the book calls them as such (and rightly so considering the etymology of the term).

Overall, Boneshaker is a fun book in which Priest's characters come to life and become the centerpiece of the novel. Priest creates dramatic conflict, not through high stakes or epic battles, but through the genuineness of her characterization.
Posted by Charles at 6:54 AM