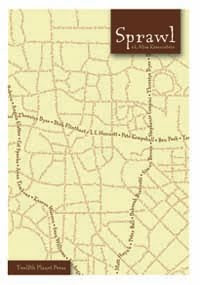 Sprawl is an interesting book to review because it created two distinct impressions on me: upon receiving the book and after reading its contents.

The first should be contextualized: I received from the publisher a box of books containing Bleed (by Peter M. Ball), Glitter Rose (by Marianne de Pierres), and Sprawl. The former two are small and compact books, with Glitter Rose being an impressive hardcover. These aesthetics aren't arbitrary as the text contained within are similarly tight and compressed. Sprawl, while still relatively small--at least compared to US trade paperbacks (much less hardcovers)--is large and bulky compared to its siblings. It's a stark contrast to the previous Twelfth Planet Press books that I've read, but in a good way. It screams that this is an anthology crammed with content and a variety of authors. The table of contents and page count proves that.

The second is more relevant to a holistic review. The thrust of the book is to produce "a suburban anthology of Australian fantasy," as mentioned in the introduction. To be honest, Sprawl felt like reading a volume of Philippine Speculative Fiction in the sense that it showcases local authors (in this case, Australia), each with a unique voice and style. While there is a theme--the suburban part--each story felt unique and different so that I didn't really know what to expect with each story. This isn't a paranormal romance/urban fantasy anthology for example, yet on the other hand, the book isn't simply a set of unthemed stories. There's a lot of diversity here--from alternate history to horror to metaphoric fiction--but at the same time you felt it was rooted in suburban Australia.

Having said that, as per the nature of anthologies, Sprawl is a mixed bag. While all of the stories are, at the very least, competently written, they're not all homeruns. For example, while stories like "One Saturday Night, with Angel" by Peter M. Ball or "Sweep" by Simon Brown are enjoyable, there's nothing striking about them and honestly forgettable. Then there are the pieces which can be contentious: "Parched" by Sean Williams, which you can either interpret as flash fiction in verse or simply poetry, is either a hit-or-miss depending on the reader. Another example is  "Relentless Adaptations" by Tansy Rayner Roberts and you'll either love it or hate it, depending on how you feel about literary mashups.

And then there are stories which are effective and powerful you want to include them in various "best of" anthologies. One such piece is "Her Gallant Needs" by Paul Haines and it impressed me on several levels. On one hand, it's quite disturbing yet goes beyond the simple horror tropes. In terms of writing, the attention to detail is authentic and there's a sense of versimilitude, especially considering that it's told from the point of view of a teenager. One memorable scene for example is how the protagonist, after what is the climax of the story, grabs some Atari games despite the horror he just witnessed. Similarly, there are subtle details that hint that there is something off about the narrative, yet the setting of suburban Australia is used to good effect to explain the narrator's ignorance.

Other impressive stories in the anthology include "No Going Home" by Deborah Biancotti which is atmospheric and presents a different kind of dilemma. "Gnawer of the Moon Seeks Summit of Paradise" by Anna Tambour is one of the longer pieces in the book and often jumps to various tangents but it's a credit to her writing style that one doesn't mind these detours and how she finally makes it all come together in the end.

Sprawl delivers a distinct and varied set of the stories highlighting Australia and its authors.
Posted by Charles at 6:27 AM