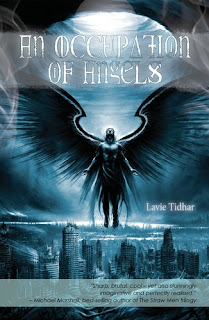 On the day of publication of his latest book, the supernatural thriller An Occupation of Angels, Lavie Tidhar picks five favourite works which helped inspire it.

1. Raiders of the Lost Ark

Not only does the first Indiana Jones movie show once and for all that Nazis make the best villains, but it has everything else, in the best tradition of the 30s movie serials and pulp fiction: a tough hero, a beautiful girl, a mysterious object of great power, an international scope, a chase, a mystery, ancient ruins... In An Occupation of Angels the girl is the tough hero, and the sunny climes of Egypt give way to the frozen ways of Siberia, but the spirit of pulp, I hope, runs through it nevertheless, and the sense of adventure, and mysteries, and fun.

In Declare, Tim Powers created a Le Carre-style thriller focusing on the fictional Andrew Hale, the real-life story of British superspy Kim Philby (and his father), and Noah’s Ark! A brilliant mix of the spy novel with the supernatural, filled with Powers’ usual meticulous historical research, and showing that Cold War era Russians make the second best villains. I saw no reason in An Occupation of Angels, incidentally, not to have both... including a scene with our heroine trapped in the dreaded Lubyanka prison. Naturally.

Philip Pullman’s Northern Lights (or The Golden Compass, for you Yanks) is many things, including, I think, a damn good thriller. It’s set in the North, where my own heroine, Killarney, ends up, and it includes contemplation of the role of God and belief, and angels, all of which feature in An Occupation of Angels. I loved Northern Lights when I first read it... I even had a first edition at some point, long sold on a lean month to pay off rent.

Or The Club Dumas to you Yanks (why do Americans keep changing perfectly good titles? See also my last book below). Arturo Pérez-Reverte’s masterpiece of book collecting, Three Musketeers aficionados and, just possibly, the devil was made into an excruciating film starring Johnny Depp (The Ninth Gate) but if we ignore Polanski (as we should!) this book reminds us just how important books are – and how much fun they can be, too.

Or Smilla’s Sense of Snow to our American cousins (as readers of John Le Carre would call them). Another wonderful book, by Peter Høeg, combining a murder mystery, a possibly science fictional, possibly Tintin-inspired premise, and some of the best writing ever to grace a page, this book really knows snow.

There’s a lot of snow in An Occupation of Angels, too – inspired by my own trip across Siberia, on the Trans-Siberian route from Moscow to Beijing, in 2000 – as well as angels, spies, Nazis, the KGB, God, trains, microlights, knife fights, snipers, small planes, an ice castle and a transdimensional gateway. Possibly.

Lavie Tidhar’s An Occupation of Angels (“stunningly imaginative and perfectly realised” – Michael Marshall) is released today. Pick up a copy on Amazon or follow Lavie on Twitter for a chance to win signed copies of his books!
Posted by Charles at 6:49 AM