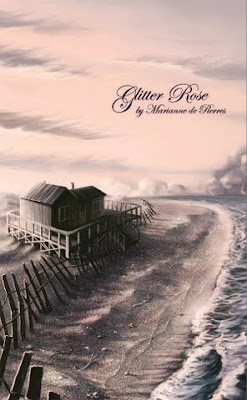 After reading Marianne de Pierres's short story collection, I realized that the book's packaging was apt. Glitter Rose is small hardcover that’s compact and gives off the vibe that it's elegant and reliable. Pierres's prose is similar: it's concise, fast-paced, and quite atmospheric. Arguably it's the latter that is the author's strength. Four of the five stories included here focus on her fictional Carmine Island and what immediately grabs you in the sense of foreboding and eeriness.

Looking at it objectively, there's nothing remarkable when it comes to the plot of Pierres's stories and neither is the language fanciful nor precious. Instead, the author focuses more on characterization and developing her setting without being overt when it comes to the details. Take for example the protagonist Tinashi. It's clear that she's haunted but it isn't until the third story, "The Flag Game", that the specific nature of her crisis is revealed. Yet in the initial short story, "Glimmer-by-Dark", we already realize that she's running away from some tragedy. Another character that shines through the text is Carmine Island. It takes a skillful writer to make the setting a unique individual and Pierres succeeds here. This is a good example of how a writer can conjure images in the reader's mind without ramming description down our throats.

Having said that, what is Glitter Rose? It's a collection of five stories, four of which revolves around de Pierres's Glitter Rose (or Carmine Island, as I've been using in this review) setting. The way the book is designed is intentional. There is no table of contents for example and we immediately dive into the first story. And in a way, this makes sense as The four stories, read in chronological order, form a coherent narrative but each one easily stands on its own. It's only after the fourth story that we get a section devoted to the author's notes for each story before it transitions into the fifth story, a stand-alone piece on an enigmatic bookshop. The style of "In the Bookshop" is undeniably de Pierres's as she employs the same techniques which made her Glitter Rose stories potent.
Posted by Charles at 6:58 AM