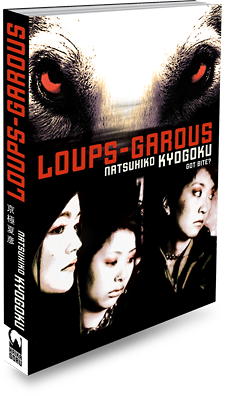 It’s interesting how Haikasoru is positioning itself as a brand. I can easily see many conventional marketers baffled at Haikasoru’s strategy, especially considering how they’re loose with their genres when it comes to the books they publish. Last year, for example, they released Zoo which is more along the lines of horror, and contrast this with All You Need is Kill which feels like a modern Heinleinian military SF. I bring this up because by the time I read the ending of Loups-Garous, I don’t think I’ve ever read a genre mash-up that’s as ambitious as this novel, and yet it’s apt that Haikasoru is publishing this kind of material.

The first few chapters already hints at this interstitiality. On one hand, you have a seemingly utopian setting, with prejudice and bias seemingly eliminated, and people are educated via computers rather than personal interaction. It screams science fiction to me, and Natsuhiko Kyogoku explores the implications of living in such a world, and becomes a sub-plot of the book. On the other hand, there are mysterious murders taking place, and while it could have taken the route of science fiction mysteries that Asimov used to write, the book has a more suspenseful atmosphere to it, with the thriller genre label being more appropriate.

Digging deeper into Loups-Garous however, there is the enigma of the book’s title. Could this possibly be dark fantasy or outright horror? Complicating things are the other elements that Kyogoku throws in when we come to the ending. At this point, I can’t discuss the book without some spoilers, so readers are warned. Mostly, it feels like the author is juggling too many balls, and ends up dropping some of them. For example, in the climax, there’s an anime-ish mecha that makes an appearance. I wouldn’t say it’s not foreshadowed, as it’s hinted earlier in the novel, but there’s a lack of synergy between its presence and the serious tone (or failing that, hard SF) that the narrative previously established. There is also the surprise reveal as to the identity of one of the killers, and while this element is foreshadowed near the end, it would have been helpful had it been seeded much earlier.

Characterization is also partly to blame with the lack of synergy between the genre mash-ups. One of the characters for example is Chinese and she quickly falls into the role of the martial artist of the group. While Kyogoku must be credited for choosing to depict the action scenes in the background, this element nonetheless contributes to the less-than-perfect execution of what would have been the ultimate interstitial novel.

That’s not to say Loups-Garous doesn’t work. For most of the book, it’s an engrossing narrative that sustains the reader’s attention and makes you feel frightened at the right moments. Kyogoku makes the reader question the dystopic elements of the setting; the characters feel mortal and just when you’ve left your guard down, a twist in the plot keeps you unsettled. Even the science fiction aspect becomes more developed and fleshed out as the narrative progresses. Perhaps the best description for Loups-Garous is that it’s a flawed novel--and these weaknesses are evident--but the pros more than outweighs the cons.

Another element worth noting is the ensemble all-female cast of the novel. All of the points of view for example are from the perspective of the female characters. The protagonists are all female, save for one, and each one is given distinct mannerisms and roles. In fact, this is almost a war of the sexes as majority of the males in the book are presented as either incompetent or villainous.

Worth praising is the juxtaposition that Kyogoku uses. Readers follow two perspectives, the triumvirate of eccentric youths, and that of their mutual counselor who is more directly involved with the investigations. Each perspective has a different tone to it, although it’s clear to readers that the two are somehow linked.

In the end, Loups-Garous is an interesting read, and the author must be applauded for his attempt at combining various genres, even if not all of it is seamless.
Posted by Charles at 7:44 AM