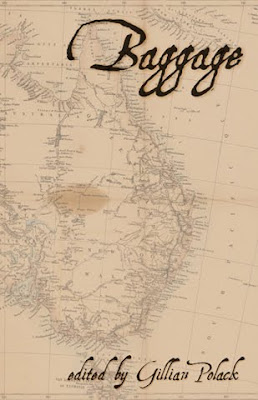 I applaud Australia’s independent press (in this case Eneit Press) because they tend to publish books that are daring and different from what larger presses (thus presumably having larger resources) are producing. In the case of Baggage, the theme of this anthology is cultural baggage, and the contributors interpret them in different ways.

I won’t lie. This isn’t one of those rare anthologies where majority of the stories/poems piqued my interest. There are pieces which I felt are weak, such as “Kunmanara--Somebody Somebody” by Yaritji Green, which is great when it comes to setting and atmosphere but stumbles when it comes to the resolution of the conflict as I felt it was resolved easily.

Thankfully, this is a compact book (thirteen stories/poems all in all), and there’s enough material here that I find striking and worth recommending:

The opening story is “Vision Splendid” by K.J. Bishop and while it did not immediately catch my eye, a comprehensive rereading revealed the subtle delights of this story. There’s a lot to be praised here, from the nuances in dialogue to the recurring theme of ambiguity. As far as the theme is concerned, this one impressed me because Bishop attacks from several directions, and whether the reader realizes one of them or all of them, it’s still well-crafted story. In many ways, I find this apt to be the opening piece, partially because of its ambition, and partially because of the author’s technique.

“Macreadie v The Love Machine” by Jennifer Fallon is another memorable piece in the anthology. Let me be frank about it: I never thought I’d enjoy a “talking-heads” or expository story as much as this. Just goes to show that you can get away with breaking prescribed “rules of fiction” as long as you can pull it off convincingly. In this case, Fallon presents the reader with a science fiction concept but does so in a way that’s rooted in popular culture, sneaking in wit and humor when the opportunity arises. And just when you thought that’s all Fallon is trying to accomplish, the ending still gives you additional food for thought.

Another story I want to highlight is “Acception” by Tessa Kum. Now I’m aware of the author’s struggles with identity and “Acception” is a good example of how one should adapt their personal experiences into fiction. Kum fabricates an Orwellian society where racial distinction is the pinnacle of this utopia-dystopia and coming from a mixed-heritage background myself, I did enjoy the implications of the story. That’s not to say the piece is perfect. The earlier section of the story flows smoother than the latter part, especially when the dialogue feels more natural and honest. The ending feels like there’s too much exposition, but for the most part, it nonetheless works.

At the end of Baggage is an afterword by the authors, explaining the influences of their respective stories. I have mixed feelings about this (and thankfully it’s at the end of the book rather than preceding the said stories) as I feel that stories should stand on their own. On the other hand, it gives readers (and reviewers like me) a gauge as to whether the authors succeeded in what they were aiming for.
Posted by Charles at 8:28 AM