This is probably going to be one of those experimental hybrid posts that's one-part informative and one-part advertorial.

First off, Monday's book review of Ender in Exile has received some comments. What's fascinating about Ender's Game as a series is that it has a non-linear chronology. It's not like The Wheel of Time where you simply read books one to eleven in that order. It's probably more similar to Anne McCaffrey's Pern although it isn't as confusing as Dragonlance.

Wikipedia has a flowchart of the timeline of events:

(Source)
Anyway, to the uninitiated, the flowchart can be confusing so I decided to make my own, focusing on the novels (the only one I haven't read is A War of Gifts so I leave it out of my chart): 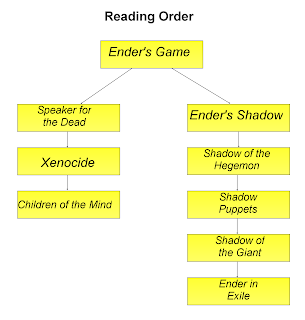 This is my suggested method of reading the books. The main book that you should read, of course, is Ender's Game. Everything else branches off from there.

Speaker for the Dead and its ilk follows the story of an older Ender. For me, the tone of these novels is quite different, focusing more on the science fiction aspects (biology, extra-terrestials, etc.) and has a more mature tone. (Philosophy and religion is thrown in as well but that's present in all the books of the series.)

Ender's Shadow until Shadow of the Giant, on the other hand, follows the story of Ender's "sidekick" Bean. The tone of these novels is a smoother transition from Ender's Game and Shadow of the Hegemon has a more political focus.

The latest novel, Ender in Exile, returns to Ender as a narrator but it builds off the events that take place in Shadow of the Giant. While it can be seen as a prequel to Speaker for the Dead (because it follows Ender's point of view), it's more of a sequel to Shadows of the Giant as it resolves some threads there.

If you want to see how the novels relate to each other as far as chronology is concerned, I refer you to this flowchart: 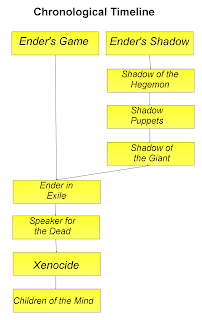 As can be seen, Ender's Game and Ender's Shadow takes place more or less in the same time period. Events branch out from there, with the end of Shadow of the Giant transitioning to the middle of Ender in Exile.

Now the second part of this feature will talk about flowcharts. I could have opted not to use images to show how the Ender novels relate to each other but it wouldn't be as effective. Most people tend to think visually and flowcharts are one way of representing a thought process.

The program I used to make my flowcharts is the software aptly titled Flowchart. It's in its beta stage and currently free. What I like about it is that it's browser-based which mean whether I'm using Windows XP at Home or OS X at the office, I can access Flowchart. Because it's cross-platform, I can share my flowcharts to anyone and know that they'll be able to read it. And if all else fails, Flowchart exports to PNG (an image file) and PDF.

The program isn't as intuitive as I'd like it to be (I had difficulty finding the export function) and it's not without its flaws (the arrows tend to disappear on my screen for example even if they're still there). For the most part, however, it works and anyone playing with it for an hour or so will quickly grasp its many functions.

When it comes to writing, flowcharts are optimal when you're devising your Choose Your Own Adventure novel or hypertext "book". However, it's also helpful in plotting long family trees, timelines of your non-linear and/or mosaic novel, interstellar routes, relationships between factions/nobles/families, etc.

Those writing scripts, either for video games or film, might also find it a handy tool to use.

Personally, as a tabletop RPG player, flowcharts are also a good way to help design your campaign. If you don't want to railroad your players but unwilling to totally embrace the free-form nature of a sandbox game, flowcharts are a good way of devising beforehand how the story might develop. One D&D supplement wherein flowcharts were put to good use was Heroes of Battle.

Anyway, flowcharts is something that might aid you in your writing and a tool to add to your arsenal. Flowchart.com is currently free and is a good web-based application although don't hesitate to take out a sheet of yellow pad and start scribbling your own.
Posted by Charles at 7:15 AM