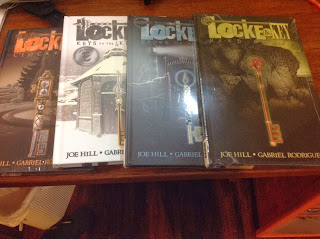 I read the first volume of Locke & Key back in 2008, when a friend gave it as a Christmas present. It was a satisfying start to a comic series, but I also knew I did not want to get invested until the series was done. Flash forward to 2013 when IDW released the last issue of the series (and the fifth volume has yet to be compiled) and creators Joe Hill and Gabriel Rodriguez did not disappoint. There's several reasons why the comic works, including a smart and compelling villain, a diverse and multiracial cast (although sadly this does not extend to the main characters), and all-too-human tragedy that rings true.

I've given away the original volume I got as a present, and this isn't the first time I bought copies of the series (I've given away them too). My personal copies were bought from Comixology, but I continue to buy these physical copies since it's the best way to foist them on people (the same goes for Jeff VanderMeer's Wonderbook, which I've given as gifts multiple times).