Guest Blog: Seeking the Distant Hills Within by Daniel A. Rabuzzi 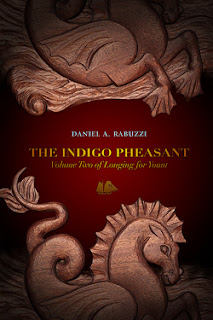 This month ChiZine Publications (CZP) published my second novel, The Indigo Pheasant, the sequel to 2009's The Choir Boats. The characters in both books concern themselves with finding a place outside our maps, a place called Yount. Whether they satisfy their longing is something I will let readers decide for themselves. In this short essay (thank you again Charles for inviting me to guest-post at Bibliophile Stalker), I will instead talk about my own search for Yount. You can decide for yourself whether I have succeeded in overcoming what Baudelaire named "that fever which grips us in moments of chill distress, that nostalgia for some land we have never seen."

I began to seek Yount in 1969, when I read The Hobbit.  I was just old enough to hear the first cold voices bidding me leave what Ursula K. Le Guin (speaking of Sleeping Beauty) calls “the wilderness within.” One is thrust out of Faerie and the path of return is barred by briars that grow to the sky. For long years I did what we all do: I worked in the Here and Now, gaining experience of the practical sort, and sticking (for the most part) to the quotidian and conventional.

The melody of Yount never left me. I have worked all my life to keep my passport to that realm, to explore just a little more. Bits of Yount cropped up in the notebooks and folios I filled from 1970 forward with stories, maps, and drawings. I have held with me specific lines of dialogue and descriptive passages since college in the late 1970’s. For as long as I can remember, I have woken up before dawn to scribble down the vestiges of dreams, and drafted stories late at night and on the weekends.

Then, one Saturday in May of 2002, suddenly and without any plan whatsoever I wrote parts of what are now the first two chapters of The Choir Boats.  No one was more astounded than I was when Barnabas and his calicosh vest appeared in the counting-house on Mincing Lane, followed by the laconic Sanford…and then Tom, my dear Sally, and soon the mysterious Maggie.

“Why now?” I wondered, and I wonder still.  I have decided Barnabas and the rest of the McDoons came knocking when they did because I had gained four nephews in the 1990’s (a fifth joined us in 2003).  As the King says to Smith of Wootton Major, some gifts are not for keeping, but must be passed on.  My nephews­ and their fathers (my brothers)­ all know something about Yount.

In the beginning and in the end (regardless of what we do in between), our stories to one another matter most.  From the shortest but most powerful story - ­ “I love you” - ­to the Mabinogions and Mahabharatas, the Kalevalas and Sundjiata Keitas and Shahnamehs that define nations.  Jean Rhys put it best:  “All of writing is a huge lake.  There are rivers that feed the lake, like Tolstoy and Dostoyevsky.  And there are mere trickles, like Jean Rhys.  All that matters is feeding the lake.  I don’t matter.  The lake matters.  You must keep feeding the lake.”

Telling a story is a humbling exercise, especially when the teller is the smallest of droplets hoping to feed the lake. The story informs you that it is ready but that you are too slow, too weak, too confused to capture it.  The author never measures up to the story’s expectations.  Even our greatest storytellers acknowledge that they are capable only of presenting us with a fragile approximation of an underlying original.  To take just one example, here is Jorge Luis Borges:

“No one can write a book.  Since

Before a book can really be

It needs the dawn, the dusk, centuries,

Arms, and the binding and sundering sea.”

The McDoons found me but their story is elusive.  Imagine strangers appearing in your living room.  More than that: strangers who aren’t really strangers, but who claim to be kin, who know more about you than you know about yourself, who make themselves free with your larder, and who then order you to find out what comes next.  That’s the slightly sinister part, that you are compelled to discover and capture the story.  The path is a dangerous one.  Margaret Atwood says all writers “must descend to where the stories are kept.”  Seamus Heaney, writing about violent epiphanies, blood, and shards of bone, enjoins us to:

In the long foray

But no cascade of light. …

So I descended and found the gate to memory.  I hope you will join me as together we pass through the gate, to find ourselves back home at last in the place Octavio Paz describes:

“Willow of crystal, a poplar of water,

A pillar of fountain by the wind drawn over,

Tree that is firmly rooted and that dances,

Turning course of a river that goes curving,

The calm course of a star…”

Or, as Frodo experiences it at the very end of the trilogy: “…the grey rain-curtain turned all to silver glass and was rolled back, and he beheld white shores and beyond them a far green country under a swift sunrise.”

One big lake (a sea really, binding yet sundering), many different rivers and streams.  One Yount, many names, many roads." 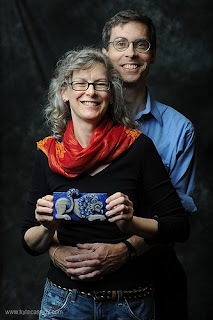 Biography: Daniel A. Rabuzzi studied folklore and mythology in college and graduate school, and keeps one foot firmly in the Other Realm.

A former banker, Daniel earned his doctorate in 18th-century history, with a focus on family, gender and commerce in northern Europe. He is now an executive at a national workforce development organization in New York City, where he lives with his wife and soulmate, the artist Deborah A. Mills (who illustrated and provided cover art for both Daniel's novels), along with the requisite two cats.

Deborah's web site: http://www.deborahmillswoodcarving.com/
Posted by Charles at 6:44 AM