Book Review: After the Fall, Before the Fall, During the Fall 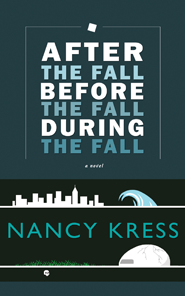 I've said it before and I'll say it again: the novella is an interesting format and it's good to see that US publishers like Tachyon Publications is publishing this kind of material (in the UK, my go to press would be PS Publishing). As far as the genre is concerned, After the Fall, Before the Fall, During the Fall by Nancy Kress is reminiscent of the type of science fiction some older fans have come to associate with the brand: it's focused on plot and the central idea. The length gives Kress the space to explore her central theme without becoming dragging.

As a personal preference, I've discovered that while I enjoy a plotty, well-planned story, I look for something more. Kress's novella fails to impress because it doesn't address the latter concerns. The prose is functional, just the right amount of description and action but nothing that charms you immediately. While the characters are fleshed out and have distinct personalities, they are transparent in their service to the plot. One point of view for example is Julie and while Kress does give her nuances, at the back of my mind is that she's female because her pregnancy will somehow factor in the story. The other point of view is Pete—and his presence could have made this a YA story—and there's something clinical about him even during his acts of rebellion. Thematically, the book is the spiritual successor to the writing style of Asimov and Clarke, with the science at the forefront of the book's thesis.

There are touches to the narrative that I did enjoy, such as the approach when it comes to the science. Julie's algorithm for example encounters some difficulties due to human behavior. She also encounters various political hurdles in her career and relationships, which is quite realistic. Pete's scenario, on the other hand, feels like an oversimplification (in much the same way the Laws of Robotics are an oversimplification but we're dealing with people here, not robots)—especially the phrase his mentor McAllister repeatedly tells him—but at least it provides a credible Adam-and-Eve scenario and leaves space for conflict.

Where Kress drops the ball is towards the end, where everything feels rushed. Julie's discoveries are quick and delivered secondhand, as opposed to the slow build-up Kress employs in the beginning. I have issues with her epiphany, as it feels a bit left field. It's definitely hinted at from Pete's perspective, but I was looking for more clues other than the third point-of-view character.

After the Fall, Before the Fall, During the Fall conforms to an old school-style of science fiction while tackling a modern concern, filtered through the writing lens of Nancy Kress. I'm not thrilled by the author's writing style, but I could easily envision myself from a decade ago enjoying this novella.
Posted by Charles at 8:18 PM