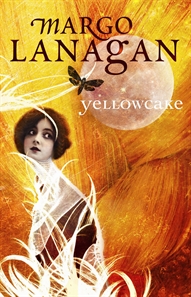 What makes a short story or short story collection stand out? Identity. Yellowcake has it. If you read all ten stories in this book, each one is undeniably Margo Lanagan's. Her writing style is unique and possesses not only depth but a certain ooomph. This collection features stories published between 2006 to 2009 and is a good sampler of Lanagan's relatively recent fiction. While some readers are impressed by Lanagan's long form, I'm more partial to her short stories.

The first thing that stands out is that Lanagan's fiction isn't easy to read--and I mean that in a good way. Your mind can't be wandering. You simply can't skip to the ending as it won't make sense unless you've been paying attention. Lanagan is meticulous with her details and a lot is nuanced rather than simply stated. There's value in re-reading the text and re-assessing one's opinions of the story. As a writer, this kind of subtlety is impressive and only a few successfully pull it off. Lanagan replicates this multiple times in Yellowcake.

That's not to rob Lanagan's fiction of its sense of wonder. One common theme in the book is how the author successfully makes the familiar unfamiliar. "The Golden Shroud," "Night of the Firstlings," and "Ferryman" for example are well-known fairy tales and myths but Lanagan presents them in such a way that it's not immediately obvious and is actually refreshing. The clues are all there however and some are more blatant than the others. "Ferryman" is a dead give-away but the charm of Lanagan's fiction isn't the M. Night Shaylaman effect but sheer skill and technique.

Yellowcake is tight, concise, and effective. While ten short stories might not seem long, the depth which Lanagan infuses her fiction gives us satisfaction measured in quality rather than quantity.
Posted by Charles at 4:59 AM