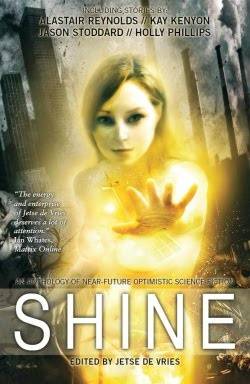 What really bugs me about the concept however is how to weave a narrative around it. At its worst, the story might have no conflict at all, or one that's not convincing. Another temptation that lesser writers might fall prey to is that the story will sound didactic, and would better serve as an essay rather than a short story. Now I've read Jetse de Vries's "Transcendence Express" and it's the perfect example of the kind of story Shine is looking for. It's hard science fiction, causes positive change, and there's a believable tension surrounding the piece. But the problem there is that de Vries is the editor for the anthology. Would he be able to find other writers capable of writing such fiction?

The honest answer is that Shine is a mixed success. All the stories, no doubt, are optimistic. But some do fall prey to my fears. "Russian Roulette 2020" by Eva Maria Chapman for example falls into the trap of utopian didacticism as the protagonist is reduced to merely being a foil in what is a one-sided narrative. There are also stories which are quite competent , but simply fail to be striking, such as "Sustainable Development" by Paul R. Stiles and "Scheherazade Cast in Starlight" by Jason Andrew.

Interesting for me to note are the stories which easily could have been dull but because of the technique the author uses, ends on a high note, albeit one that's predictable. "The Solnet Ascendancy" by Lavie Tidhar and "Seeds" by Silva Moreno-Garcia are, for the most part, trickster stories, but they work within the context of the theme.

Shine has its share of good stories such as "Overhead" by Jason Stoddard and "The Church of Accelerated Redemption" by Gareth L. Powell and Aliette de Bodard, but what I want to highlight are the stories that grabbed me by the balls so to speak. Originally, I didn't think this anthology would contain much of them, but by the time I read the closed the book, the number of memorable stories was surprising.

"Twittering the Stars" by Mari Ness could be interpreted as gimmicky due to its use of the Twitter format but Ness makes the most out of her medium. The story immediately engulfs you in the drama and wins you over to the protagonist's side. What's deceptive about the piece is that it's quite lengthy but because Ness uses Tweets, it doesn't feel overbearing. Another bonus is that the story could be read in reverse order and would still be just as relevant. "Twittering the Stars" is arguably the bleakest story in the anthology, and perhaps that's part of its charm, the fact that there's a complex yet immediate dilemma for the character to wrestle with. This is also a good example of science fiction that's relevant today: the story is set in the 2050's and I honestly doubt if Twitter will still be relevant four decades from now.

"At Budokan" by Alastair Reynolds is a story wherein the author isn't afraid of giving his imagination free reign. Reynolds manages to combine elements that on paper seem ridiculous for a science fiction story but here, he makes it work. What's surprising is that whereas the other stories tackle massive and ambitious social change, "At Budokan" has modest goals. This perhaps isn't the most socially-relevant piece you'll read in the anthology, but for me this was the most fun.

Striking the balance between sense of wonder, hard science fiction (be it biological or sociological), and social relevance is "Sarging Rasmussen: A Report (by Organic)" by Gord Sellar. This one immediately catches your attention with the author's style, and actually manages to sustain it until the very end. To me, this is optimistic science fiction done right, even surpassing de Vries's own fiction. The conceit here is that the short story doesn't read like it's preaching an agenda to you, and Sellar's enthusiasm for the story is conveyed in the text. There's a Second Foundation vibe to it and reminiscent of Nicola Griffith's "It Takes Two" from Eclipse Three but Sellar takes the concept into a different direction.

I had heard praises for Madeline Ashby before but it was only after reading her story "Ishin" that I had the realization that this was the Madeline Ashby other people were talking about. Ashby writes compelling hard science fiction that's both imaginative and very down-to-earth. I could easily see this author giving Ted Chiang a run for his money down the line, and while "Ishin" isn't the best story in the anthology, it's certainly reason enough to buy the book.

Shine isn't by any means a spectacular failure nor is it one of those rare anthologies where majority of the stories align with your personal taste. Rather, it's a mixture of hits and misses, although thankfully the good stuff outweighs the bad. The question that I ask every anthology is whether it contains enough stories that stand out to warrant its purchase and Shine is one such book.
Posted by Charles at 5:37 AM

As author of Russian Roulette 2020, I would like to respond to Charles’ criticism that it ‘falls into the trap of utopian didacticism as the protagonist is reduced to merely being a foil in what is a one-sided narrative.'
While my protagonist MV is strongly challenged by Rada about his addiction to the Web at the cost of his human relationships, I dispute that the story is 'one sided' and MV 'a foil'. He argues his corner well, adding spark to the dialogue and rising sexual tension between him and Rada. She, in turn experiences first hand, the value of ‘livestreaming’ of which she has been previously critical. In fact it is crucial to getting her out of a tight spot when they are being held at gunpoint.
I expect reactions to this story as it posits that the world needs greater awareness and consciousness rather than technical fixes, and that technology should always be the handmaiden of such evolving consciousness. If this is ‘utopian didactism’ I am guilty. I rather hope though, that I present this ‘didactism’ in a fun and entertaining way.
I am curious to know what other readers think, either here or email me, evamchapman@gmail.com